Major negative currency effects under financial items impacted the Group's result, and the profit before tax amounted to NOK 2511 million (NOK 8771 million)1), while the net profit was NOK 208 million (NOK 4551 million). Currency effects were caused by weaker NOK, and were mainly unrealised. The effects are fully offset by translation effects in the equity, which strengthened by about NOK 9 billion NOK to NOK 71 billion. 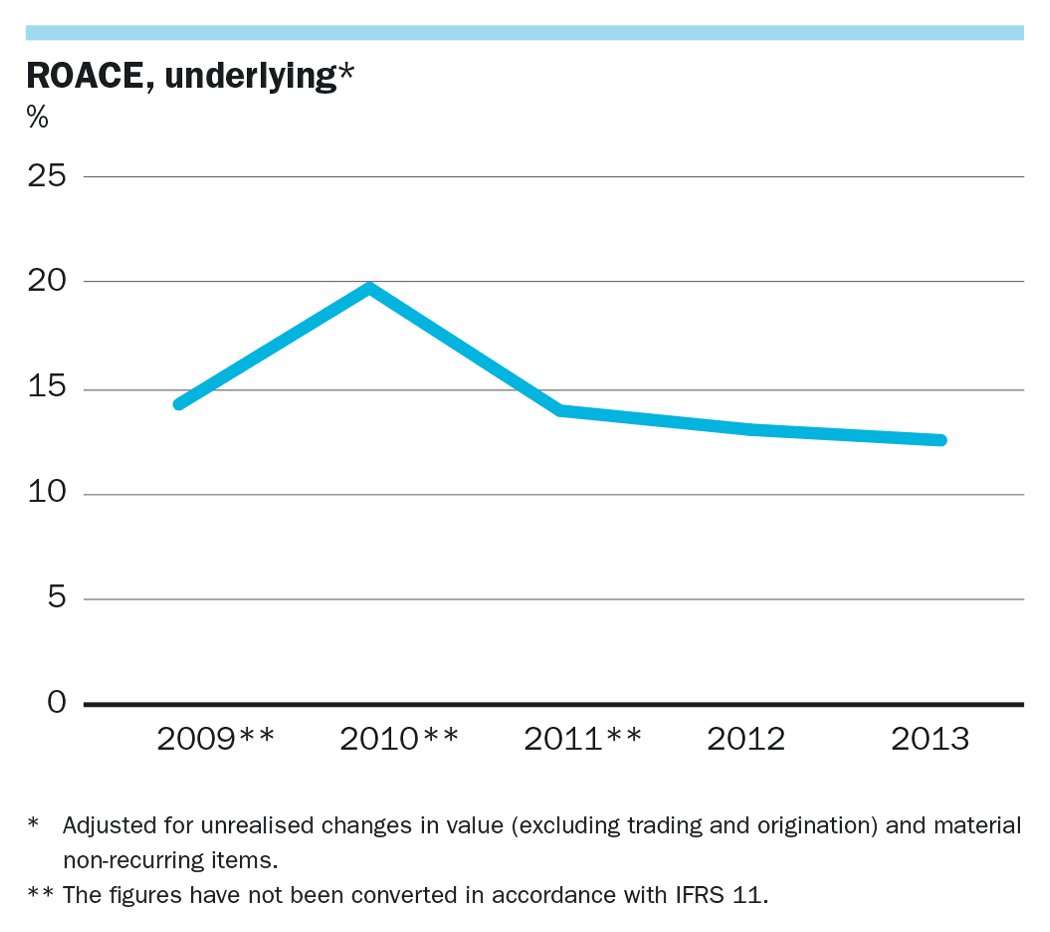 Measured as ROACE2), the Group achieved a return of 12.5% in 2013, which was 0.5% lower than in 2012. This is due to an increase in capital employed, primarily as a result of the transfer of power plants from Statkraft SF and investments in new capacity. The high level of return in 2010 was due to a particularly high operating profit that year, primarily as a result of high power prices.

Net operating revenues totalled NOK 20 545 million in 2013, an increase of 7% from 2012. The segments that contributed the most to the Group's increase was Nordic hydropower, which increased revenues primarily as a result of higher Nordic power prices, and wind power, which increased revenues as a result of higher power prices and new production capacity. The increase in revenues from Industrial Ownership relates to higher Nordic power prices and increased revenues from grid activities. The largest decline was in the Continental Energy and Trading segment, where market activity revenues were lower than in 2012, which was a record year. Other segments had minor changes in net operating revenues.

In total, the Group's operating expenses increased by 5% compared with 2012. Of the increase of NOK 563 million, NOK 321 million relates to write downs and impairment. This increase primarily relates to the Nordic hydropower and Wind power segments, and is due to increased depreciation basis from Statkraft SF to Statkraft AS in 2013 and new wind power plants. The remaining increase in operating expenses relates primarily to property tax, which increased by NOK 285 million, corresponding to 28%. The increase in property tax primarily relates to the Nordic hydropower segment, and is due to changed framework conditions in Norway and Sweden as well as the transfer of leased hydropower plants from Statkraft SF.

There were minor changes in the Group's other operating expenses compared with 2012.

Historically, Statkraft has had high EBITDA3) margins as a result of low operating expenses for hydropower production. In 2012, Statkraft launched a new business activity offering market access for small scale producers of renewable energy in Germany and the UK. The contracts are recognised gross in the income statement and therefore increase both the sales revenues and the energy purchase costs substantially. This business makes a positive contribution to the Group’s EBITDA, but the margins from this business are low and therefore reduce the overall EBITDA margin. 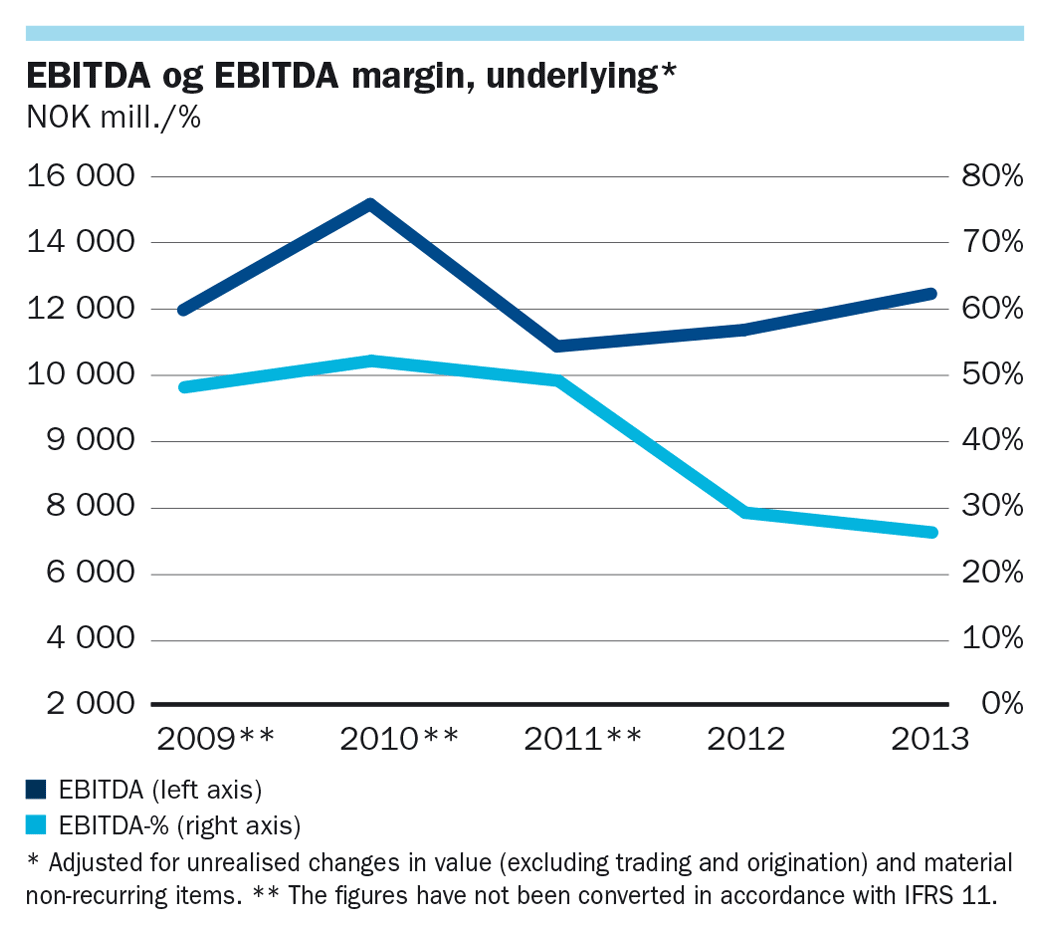 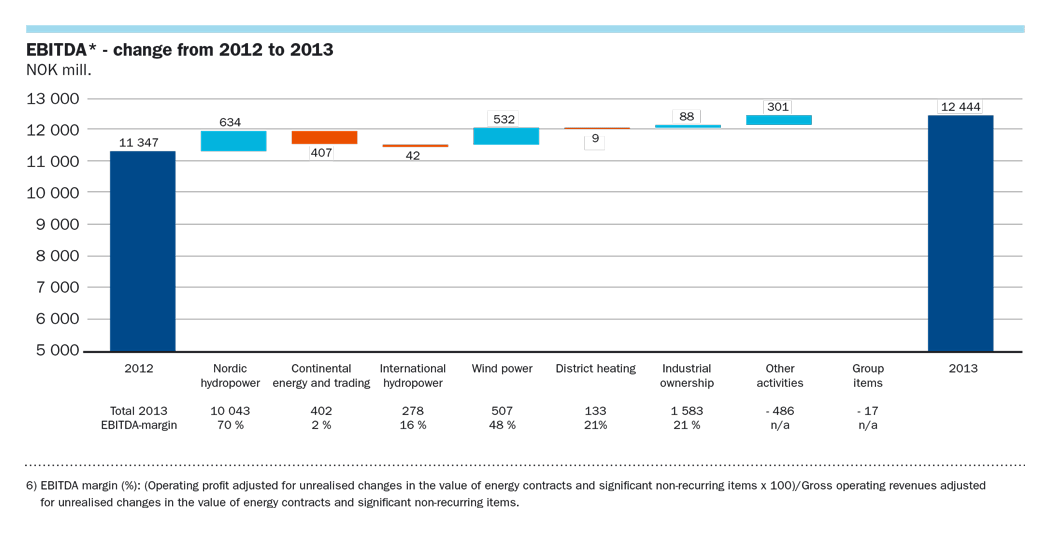 The improvement compared with 2012 relates primarily to higher revenues for the segments Nordic hydropower and Wind power. The reduction of the EBITDA for the Continental Energy and Trading segment is due mainly to lower revenues from market activities as well as somewhat higher operating expenses as a result of consolidation of biomass plants in Germany, which are now wholly owned, as well as costs associated with gas power in Germany.

Unrealised changes in value adjusted for in the underlying operating profit amounted to NOK 3288 million (NOK -1030 million). About half the positive result effect was in relation to built in derivatives which had a positive development as a result of a weaker NOK against EUR. There were also significant positive result effects associated with financial energy derivatives and management portfolios, primarily driven by falling power prices in the Nordic region and on the Continent. Gas contracts also developed positively in 2013, primarily as a result of realisation throughout the year, and this reduced the negative market value in relation to these contracts 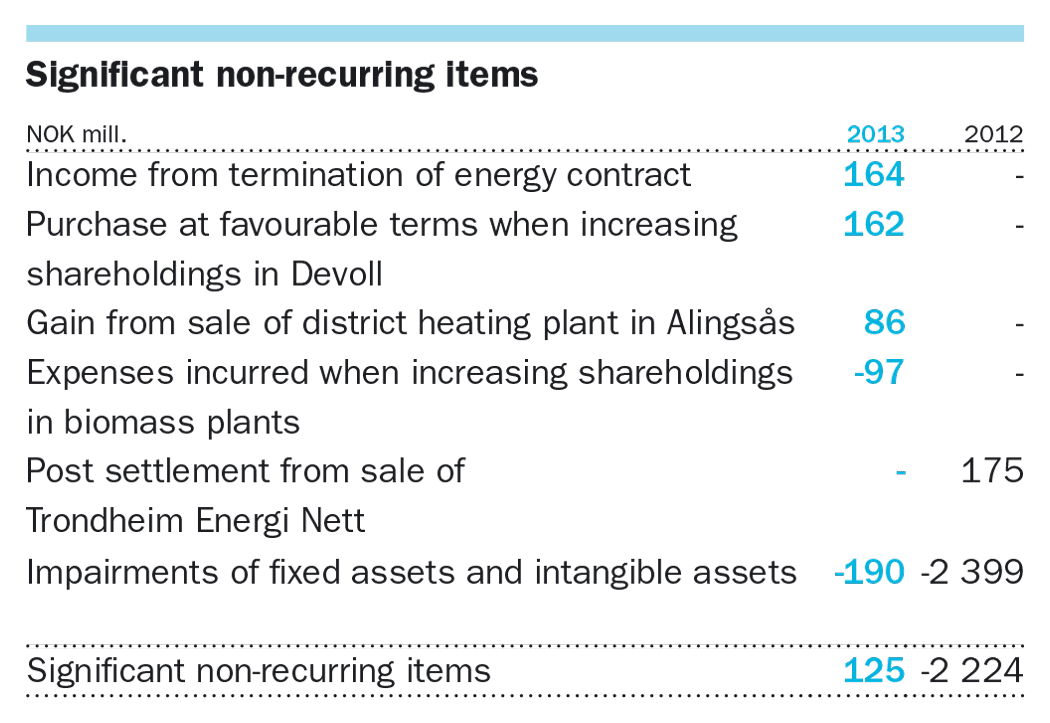 Non-recurring items excluded from the calculation of the underlying profit amounted to NOK 125 million in 2013 (NOK -2224 million).

The termination of an energy contract resulted in NOK 164 million being recorded as income. In connection with the increase of the shareholding in Devoll Hydropower Sh.A. from 50 per cent to 100 per cent, the acquisition analysis showed a purchase at favourable terms under IFRS, resulting in NOK 162 million being recorded as income. Alingsås Energi exercised its option to buy Statkraft's district heating plant in Alingsås in Sweden, with the sale yielding an accounting gain of NOK 86 million. When Statkraft acquired the remaining shares in the two German biomass plants, a disadvantageous maintenance agreement was terminated. The effect of this termination was classified as a non-recurring item.

Share of profit from associated companies and joint ventures

The Group has major shareholdings in the regional Norwegian power companies BKK and Agder Energi, as well as shareholdings in companies outside Norway, where much of the activity takes place through participation in partly owned companies.

BKK and Agder Energi achieved somewhat lower profit compared with 2012, primarily as a result of lower production for BKK and unrealised changes in value for Agder Energi. The result improvement from other associated companies was due mainly to write downs in India in 2012. The Philippines continue to deliver good results, but at a somewhat lower level than in 2012, while the negative results from Chile have been significantly improved. 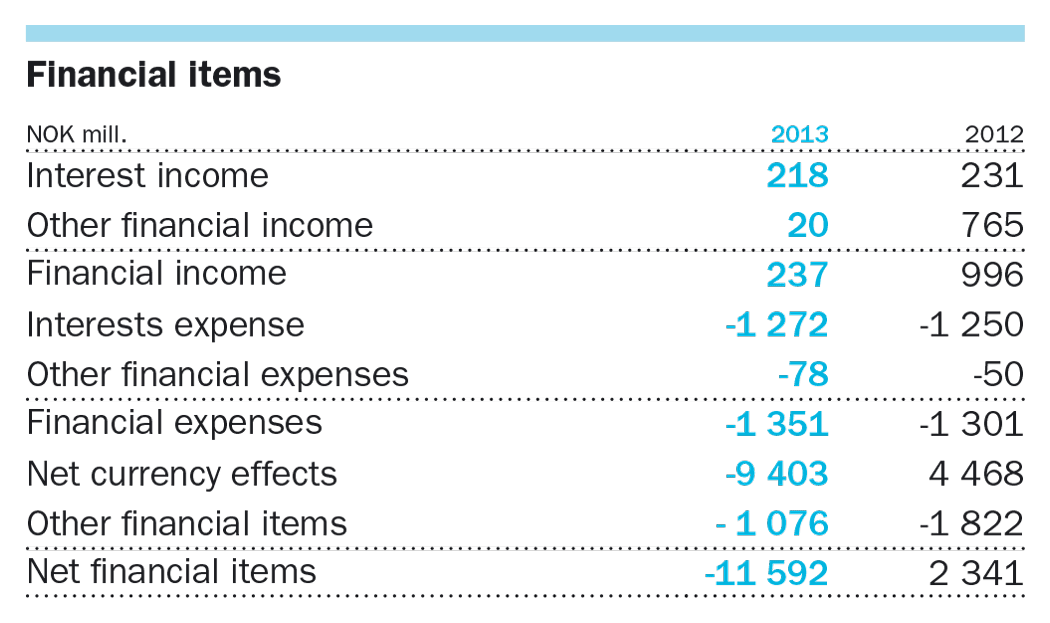 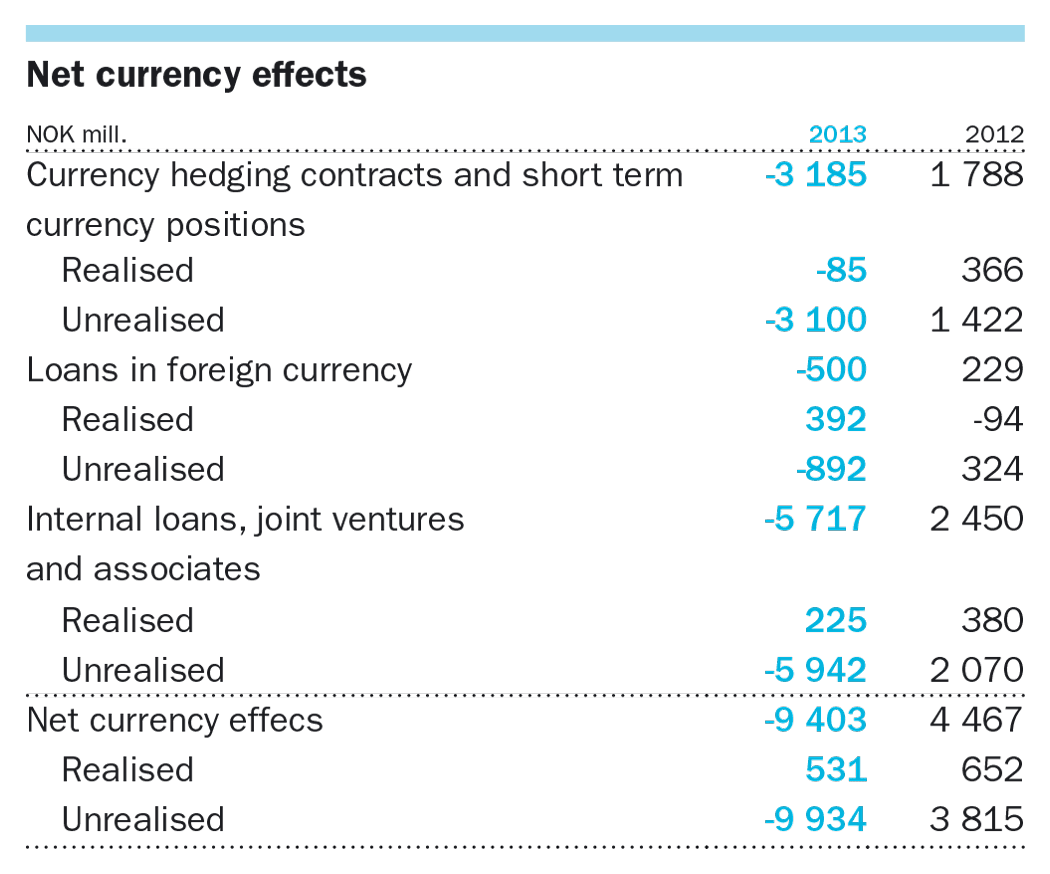 Net currency effects amounted to NOK -9403 million (NOK 4467 million), mainly as a result of weaker NOK against EUR. The effects mainly stem from internal loans and currency hedging contracts, and were mainly unrealised. These effects are fully offset by translation effects in the equity.

The recorded tax expense was NOK 2303 million (NOK 4220 million). The decline in tax expense was due mainly to a lower profit before tax and the refunding of withholding tax from previous years in connection with the E.ON shareholding. In addition, the tax expense in 2012 was negatively influenced by the downgrading of deferred tax assets.

Statkraft monitors the ability to meet future liabilities through the target figure "Short-term liquidity"5), and this target figure was 2.3 at the end of 2013, within the target range of 1.5 to 4.0. 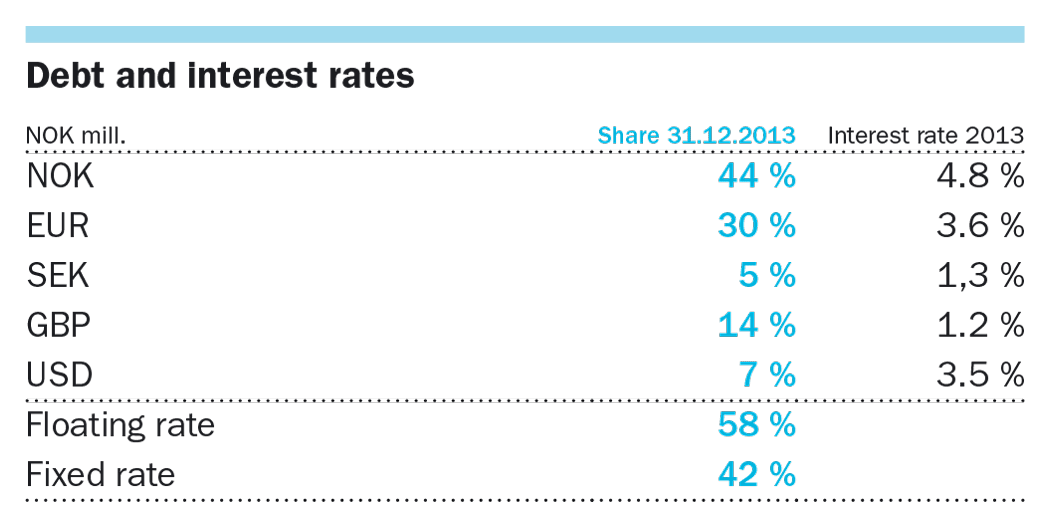 Tools for long term management of capital structure are primarily comprised by the drawdown and repayment of long term liabilities and payments of share capital from/to the owner. The Group is not subject to any external requirements with regard to the management of capital structure other than those relating to the market’s expectations and the owner’s dividend requirements.

The Group endeavours to obtain external financing from different capital markets. When raising loans, Statkraft seeks to ensure an even repayment profile, and the current maturity profile is in line with this goal. Raising of any new loans is planned in accordance with the liquidity forecast, investment decisions and sale of assets.

At the end of 2013, the interest bearing debt amounted to NOK 32 2406) million, compared with NOK 34 960 million at the beginning of the year. The decline relates primarily to the fact that a positive cash flow after net investments, dividend and group contributions have resulted in higher bank deposits and downpayment of debt. The net interest bearing debt-equity ratio was 31.2%, compared with 35.9% at year-end 2012.

Loans from Statkraft SF to Statkraft AS amounted to NOK 400 million at the end of the year.

At the end of the year, Statkraft’s equity totalled NOK 71 107 million, compared with NOK 62 350 million at the start of the year. This is 46.3% of total assets. The increase in equity relates to a positive comprehensive income of NOK 9361 million, as well as the transfer of NOK 3442 million worth of power plants from Statkraft SF less deducted dividend and group contribution for 2012 of NOK 4198 million, including minority interest. 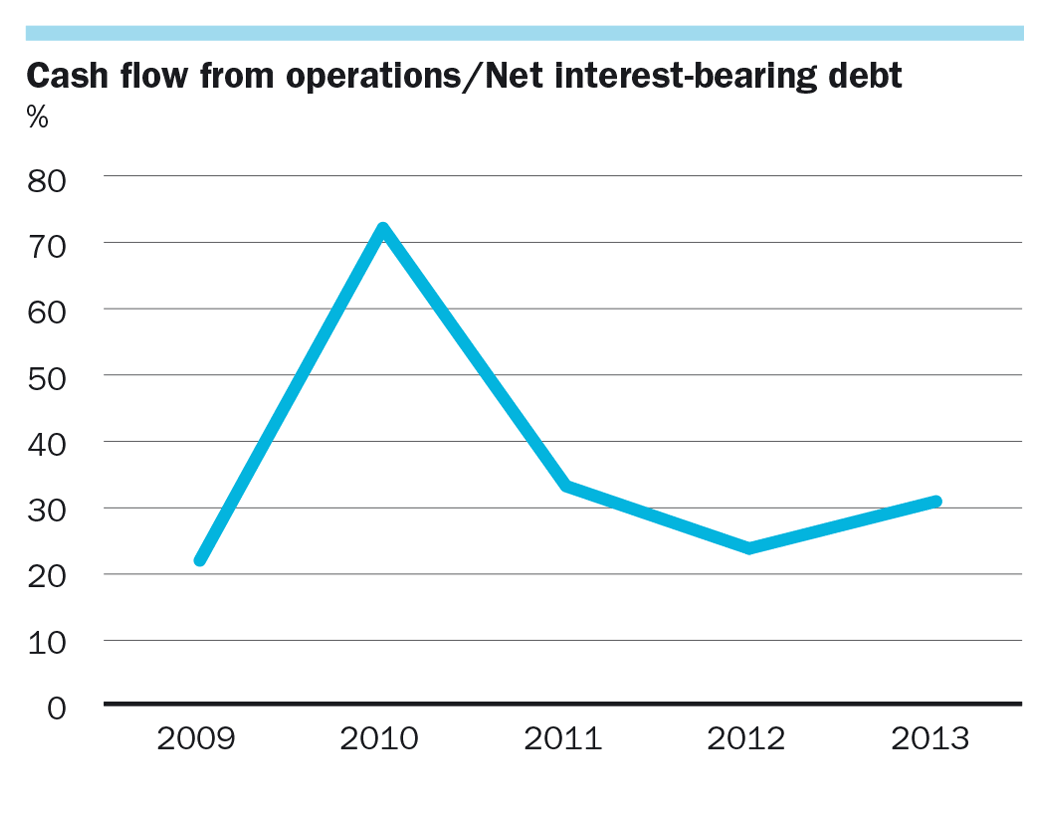 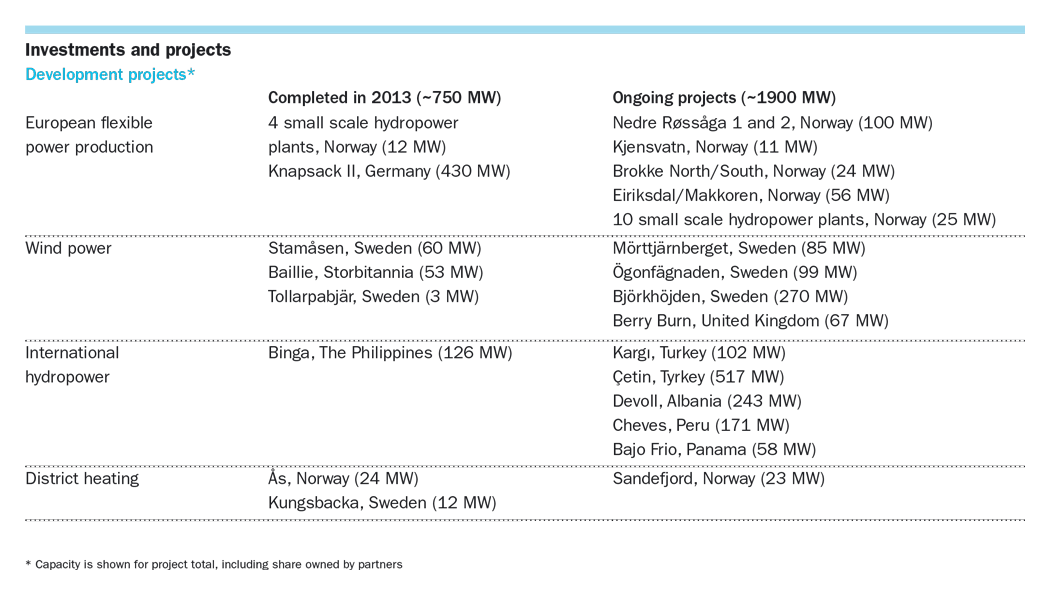 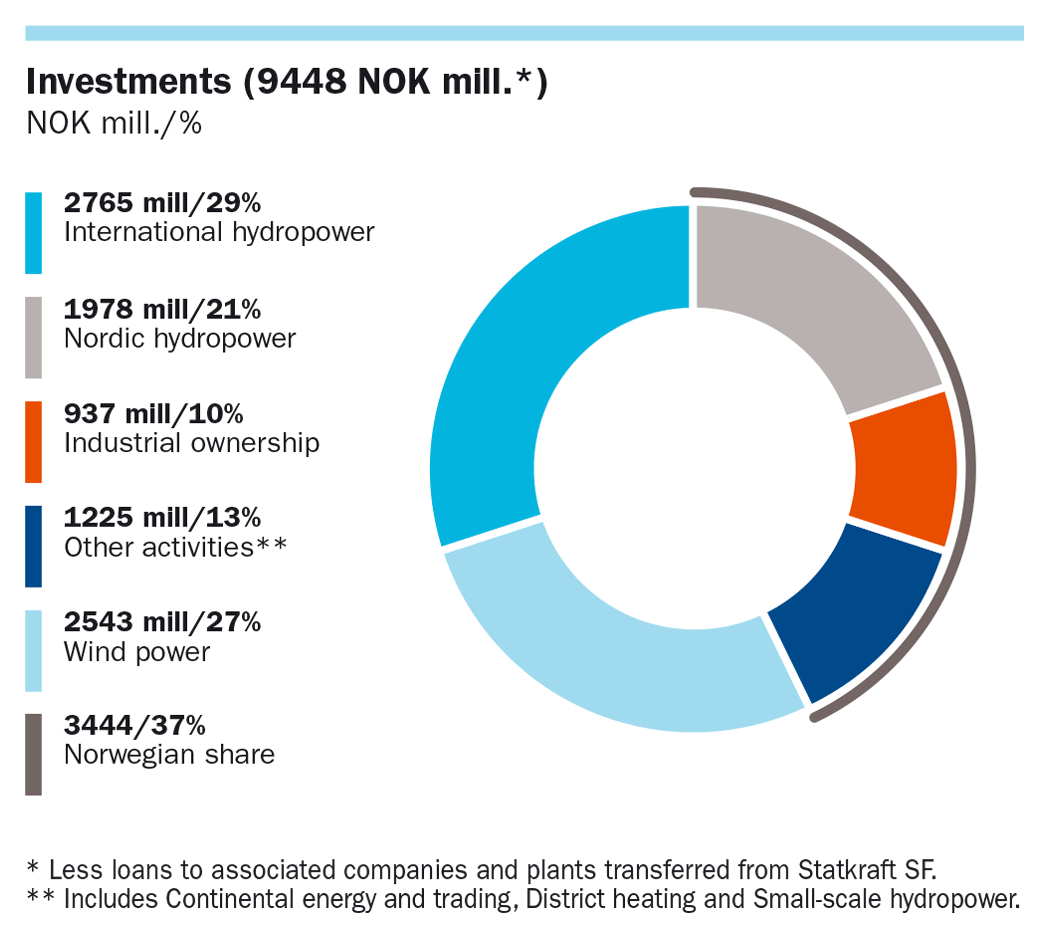 In accordance with the Group's strategy, the project activity level is high, especially as regards wind and hydropower, The Group's investment programme is flexible, and the plans are subject to continuous assessment in relation to market outlook and financial strength.

In total, Statkraft invested NOK 9448 million in 2013, of which 78% in new capacity. In addition, leased power plants worth about NOK 4 billion gross were transferred from Statkraft SF. This transaction had no cash effect. Maintenance investments are primarily in connection with Nordic hydropower. The largest investments in new capacity are in connection with wind power in Sweden and the UK, as well as international hydropower

1) Figures in parentheses show the comparable figures for 2012.

4) Net investments include investments paid at the end of the quarter, payments received from sale of non-current assets, net liquidity out from the Group upon acquisition of activities and repayment and disbursement of loans.