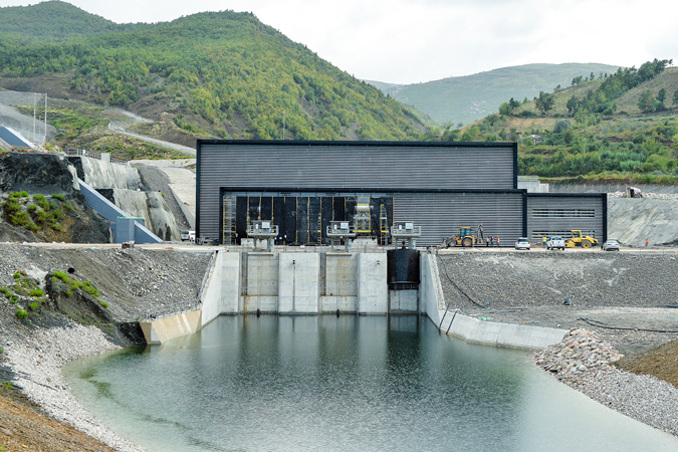 Valley river with hills and trees in Devoll Albania

Statkraft is well underway with the Devoll hydropower project in Albania, consisting of two hydropower plants Banja and Moglicë with a combined capacity of 256 MW and an annual production of about 705 GWh, increasing the Albanian electricity production by hydropower to 17 per cent.

Construction of Banja HPP started in 2013, and it was successfully completed and put into operation on September 2016. It was a project completed within time and cost.
Banja Dam is an 80-meter-high embankment dam, which makes it possible to utilize a water storage volume of between 160 and 175 meters above sea level. Banja Plant's total installed capacity is 72 MW and annual power generation is estimated at 255 GWh. Banja reservoir holds 178 million cubic meters of water, and its surface covers an area of about 14 square kilometres equivalent to more than 2000 football fields.

Moglice Dam will be one of the world’s tallest asphalt core dam at 168 meters high, the tallest constructed by Statkraft till date. The power plant is expected commissioning in the second quarter of 2019. Moglice Dam will be connected to the power station through a tunnel, 11 km long. Moglice HPP will have an installed capacity of 184 MW and annual production generation is estimated at 450 GWh.

The power plants are located on the Devoll River, about 65 kilometres southeast of the capital Tirana. The investment frame for these plants is estimated to EUR 535 million.

The project company Devoll Hydropower Sh.A. was registered in Albania in 2009, soon after the BOOT concession with the Government of Albania was signed in December 2008.  In 2013 Statkraft acquired EVN’s 50 per cent share and is now 100 per cent owner of the company and the construction project in Albania.