Good results from market activities, particularly associated with realisation of considerable positions in the Nordic dynamic asset management portfolio and increased contributions from market activities in Brazil, offset lower Nordic power prices. Operating expenses were somewhat higher than in 2013. The increase was in part related to new wind power plants, the transfer of hydropower plants from Statkraft SF to Statkraft AS in 2013, increased project activity and a weaker Norwegian krone.

The share of profit from associated companies and joint ventures was NOK 661 million in 2014 (NOK 1101 million). The decline was mainly caused by a write-down in Brazil and good results from SN Power’s activities in the Philippines. The decline was somewhat offset by the deconsolidation of the wind farms in the UK, reversal of previous years’ impairment for the Sheringham Shoal offshore wind farm as well as gains from the sale of two subsidiaries in Istad.

Substantial positive unrealised changes in value in energy contracts and non-recurring items, as well as negative currency effects under the financial items impacted the Group’s net profit. However, the overall effect of this was less negative than in 2013, and contributed to an improvement in the Group’s net profit of NOK 3685 million compared with 2013. The currency effects are fully offset by currency translation effects in the equity, and overall increase in equity throughout the year was NOK 17 billion, including NOK 5 billion in new equity from the owner.

In the following, the emphasis will be on presentation of the result from the underlying operations for items up to and including the operating profit. Unrealised changes in value of energy contracts and significant non-recurring items in consolidated activities are explained in the section ”Items excluded from the underlying operating profit”. Income statement elements after the operating
profit are analysed in accordance with the recorded result.

Measured as ROACE1), the Group achieved a return of 11% in 2014, which was 1.5 percentage points lower than in 2013. The decline was mainly due to higher average capital employed as a result of an increase in average fixed assets for the period due to investments in line with the adopted strategy. The high level of return in 2010 was due to a particularly high operating profit that year, primarily as a result of high power prices. 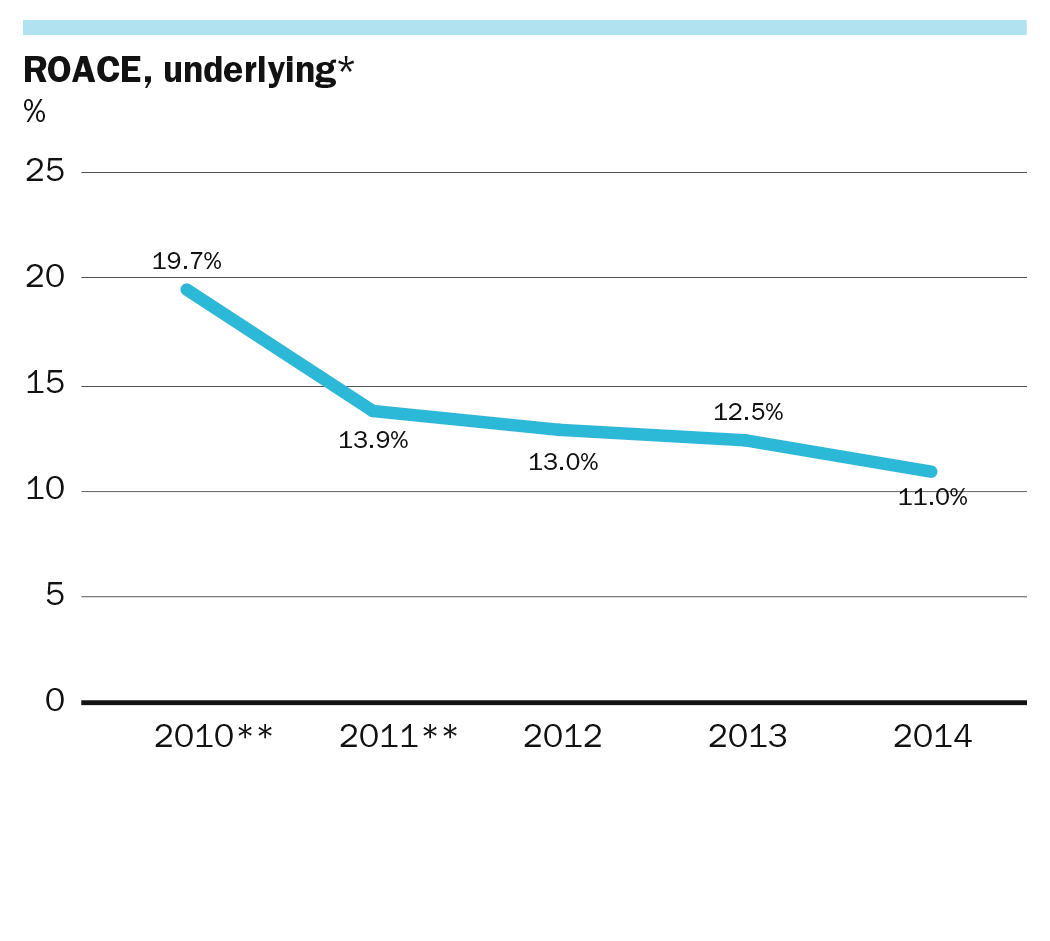 Net operating revenues totalled NOK 20 602 million in 2014, which was on a par with 2013. The Continental energy and trading segment saw a substantial increase in revenues, whereas the Nordic hydropower segment experienced a relatively significant decline compared with 2013. Other segments had minor changes in net operating revenues. The decline for Nordic hydropower and Industrial ownership was primarily linked to lower power prices, whereas the increase for Continental energy and trading was mainly related to good results from the Nordic dynamic asset management portfolio and better financial results from market activities in Brazil.

In total, the Group’s operating expenses increased by 5% compared with 2013. The increase relates primarily to the transfer of hydropower plants that were previously rented from Statkraft SF to Statkraft AS in 2014, new wind power capacity, higher maintenance costs, increased project activity and a weakened Norwegian currency.

Historically, Statkraft has had high EBITDA margins2) as a result of low operating expenses for hydropower production. In 2012, Statkraft launched a new business activity offering market access for small-scale producers of renewable energy in Germany and the UK. The contracts are recognised gross in the income statement and therefore increase both the sales revenues and the energy purchase costs substantially. This business makes a positive contribution to the Group’s EBITDA, but the margins from this business are low and therefore reduce the overall EBITDA margin. 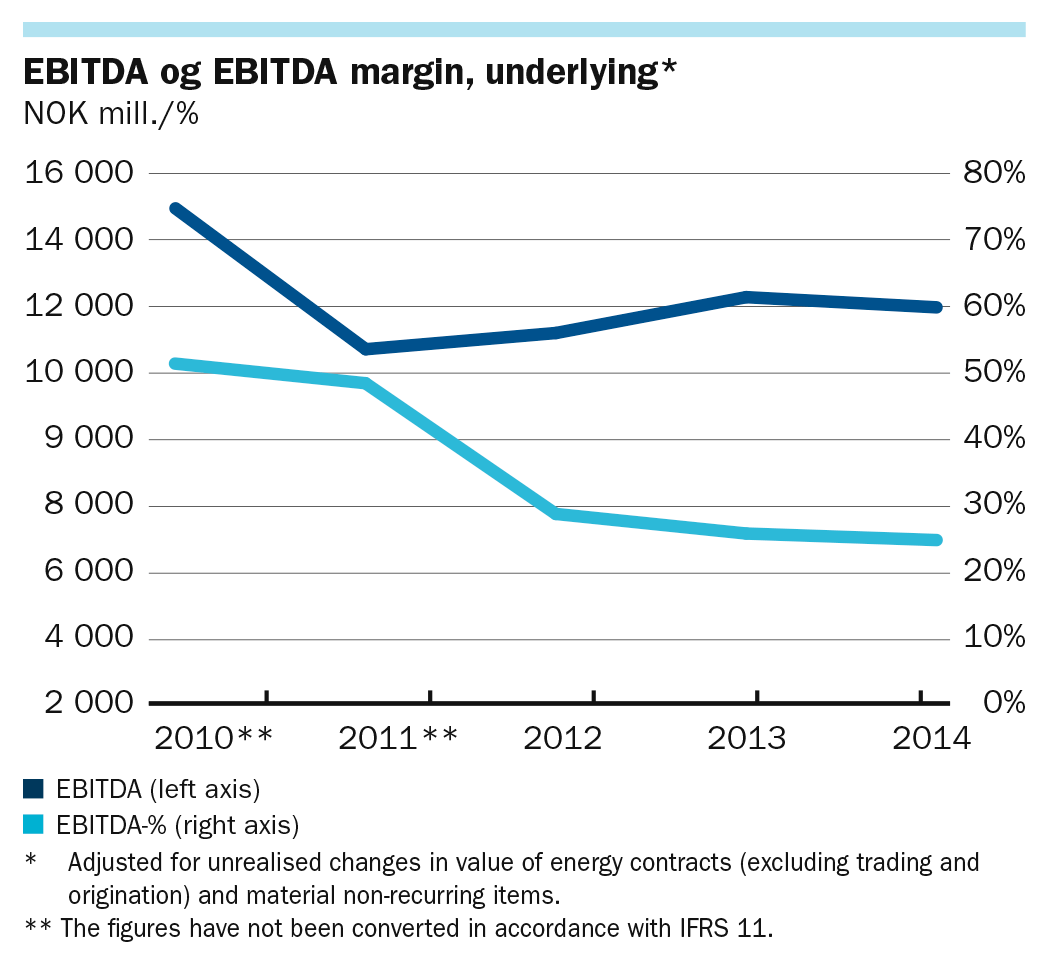 EBITDA (operating profit before depreciation and amortisation) fell by 3% from 2013 and the operating profit fell by 5%, to NOK 12 132 million and NOK 9111 million, respectively. The Group’s EBITDA and operating profit are to a large degree generated by the Nordic hydropower segment, which contributed 73% (81%) and 82% (92%) of the total, respectively. Good results from market activities, particularly associated with realisation of significant positions in the Nordic dynamic asset management portfolio and increased contributions from market activities in Brazil, largely offset lower Nordic power prices.

Unrealised changes in value adjusted for in the underlying operating profit amounted to NOK 2396 million (NOK 3288 million). The primary contributor to the positive profit effect was built-in derivatives which showed positive development as a result of a weaker NOK against EUR. Gas contracts also developed positively in 2014, primarily as a result of realisation throughout the year and falling commodity prices, and this reduced the negative market value in relation to these contracts. 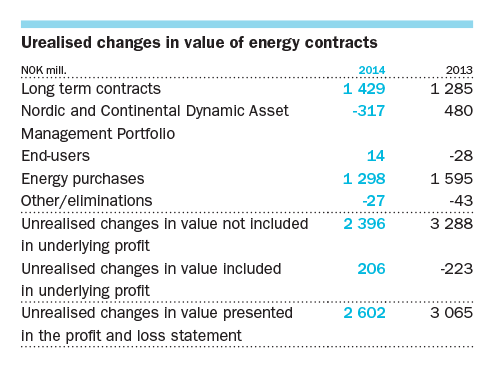 Non-recurring items excluded from the calculation of the underlying profit amounted to NOK 2053 million in 2014 (NOK 125 million). 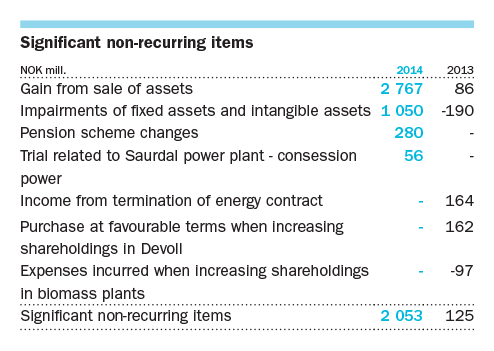 The gain from selling assets included sale of the power production in Finland, sale of shares in onshore and offshore wind farms, swap trade of hydropower plants, as well as restructuring of SN Power. The Finnish hydropower production sale yielded an accounting gain of NOK 1213 million. The sale of 49% of the shares in a company that owns three onshore wind farms in the UK gave the Group an accounting gain of NOK 1063 million. The transaction entailed that the company went from being a subsidiary to being an investment in joint ventures, and the gain shows realised gain from both the selldown from 100% to 51%, as well as an increase in carrying value to fair value of the 51% share that Statkraft still owns. The selldown from 50 to 40% shareholding in the Sheringham Shoal offshore wind farm yielded financial gains totalling NOK 283 million. The selldown entailed that the wind farm changed from being an investment in joint operations to being an investment in joint ventures. The swap trade where Statkraft took over the remaining 35% of Leirdøla and sold Svelgen 1 and 2 resulted in accounting gains of NOK 99 million. Statkraft posted a gain of NOK 109 million for the sale of Agua Imara in connection with the restructuring of SN Power.

The Cetin hydropower project in Turkey was impaired by NOK 1050 million due to delays and replacement of the contractor. Pension costs have been reduced by NOK 280 million in connection with scheme changes in Norway. These changes include life expectancy adjustments and disability pension. The court ruled in favour of Statkraft in the case concerning concessionary power brought by eight municipalities. This allowed Statkraft to recognise NOK 56 million in income.

Share of profit from associated companies and joint ventures

The Group has major shareholdings in the regional Norwegian power companies BKK, Agder Energi and Istad, as well as shareholdings in companies outside Norway, where much of the activity takes place through participation in partly-owned companies.

The decline for International hydropower was primarily related to two factors, a write-down in Brazil in 2014, and lower financial results from SN Power’s activities in the Philippines. The decline was somewhat offset by the recognition of an insurance settlement in Chile as income. The share of profits for Wind power were related to the UK wind farms that are now presented as joint ventures, and the reversal of previous years’ impairment was the primary contributor to the result. The decline for Industrial ownership was mainly related to unrealised changes in value of energy contracts in Agder Energi, somewhat offset by sales gains in Istad.

The increase in other financial income was primarily related to gains linked to the SN Power transaction. 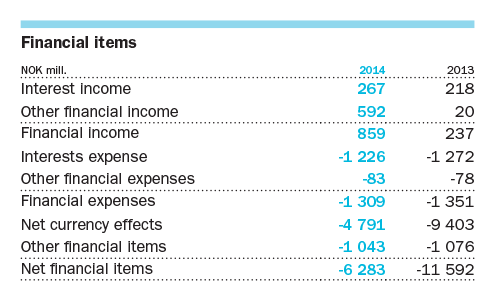 Net currency effects amounted to a loss of NOK 4791 million (loss of NOK 9403 million), mainly as a result of weaker NOK against EUR. The effects mainly stem from internal loans and currency hedging contracts, and were mainly unrealised. These effects are fully offset by translation effects in the equity.

The recorded tax expense was NOK 4045 million (NOK 2303 million). The increase in tax expense was due mainly to higher profit before tax and the refunding of withholding tax from previous years in connection with dividends from the shareholding in E.ON in 2013.

The Group generated a cashflow from operating activities of NOK 8896 million in 2014 (NOK 9499), a decrease of 6% compared with the previous year.

The changes in short and long-term items had a negative effect of NOK 2726 million (NOK -2444). The change was mainly related to cash collateral.

Statkraft monitors its ability to meet future liabilities through the target figure ”Short-term liquidity”4), and at the end of 2014, this target figure was within the target range of 1.5 to 4.0.

Tools for long-term management of capital structure are primarily comprised by the drawdown and repayment of longterm liabilities and payments of share capital from/to the owner. The Group is not subject to any external requirements with regard to the management of capital structure other than those relating to the market’s expectations and the owner’s dividend requirements.

The Group endeavours to obtain external financing from different capital markets. When raising loans, Statkraft seeks to ensure an even repayment profile, and the current maturity profile is in line with this objective. Raising of any new loans is planned in accordance with the liquidity forecast, investment decisions and sale of assets.

Loans from Statkraft SF to Statkraft AS amounted to NOK 400 million at the end of the year. 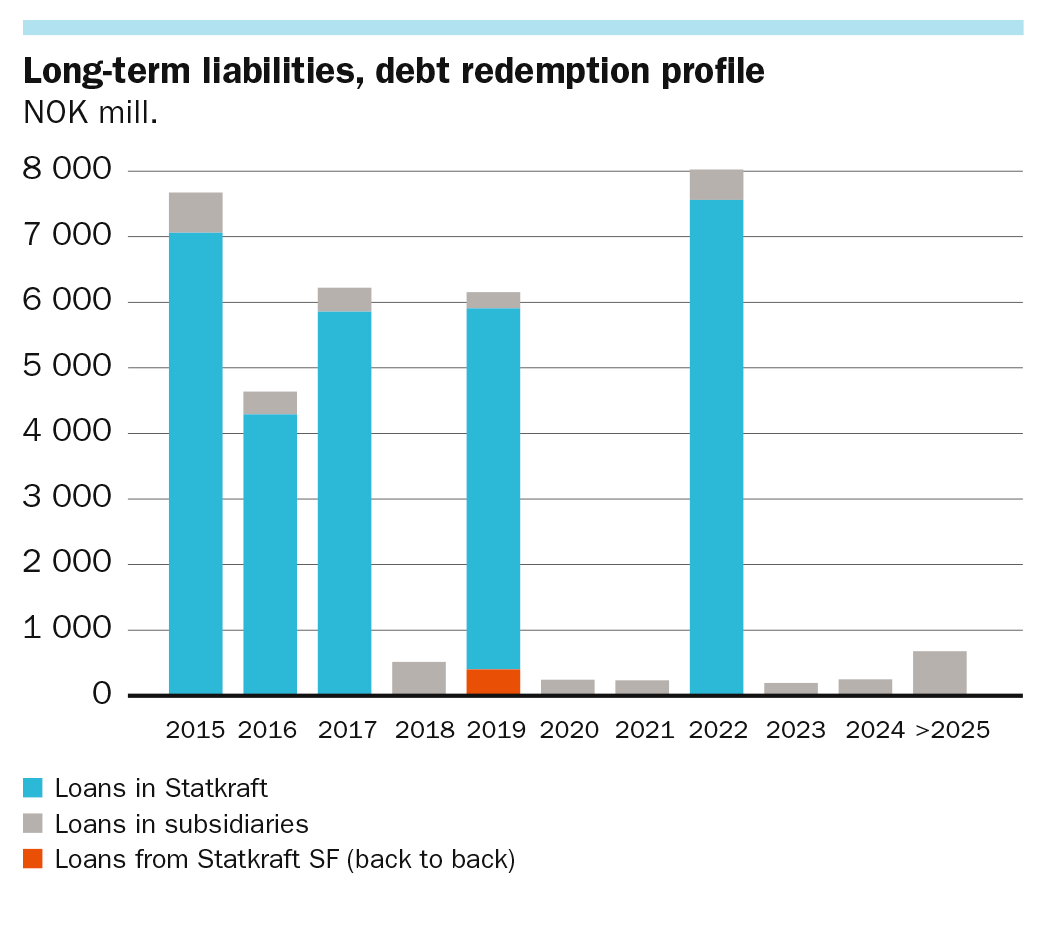 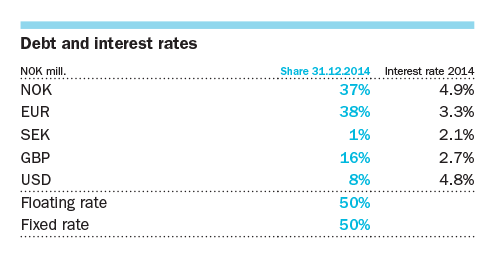 At the end of the year, Statkraft’s equity totalled NOK 88 059 million, compared with NOK 71 107 million at the start of the year. This corresponds to 52.5% of total assets (46.3%). The increase in equity was associated with a positive total comprehensive income of NOK 10 284 million and capital contribution from Statkraft SF of NOK 7350 million.

In accordance with the Group’s strategy, the project activity level is high, especially as regards wind and hydropower. The Group’s investment programme is flexible, and the plans are subject to continuous assessment in relation to market outlook and financial strength. 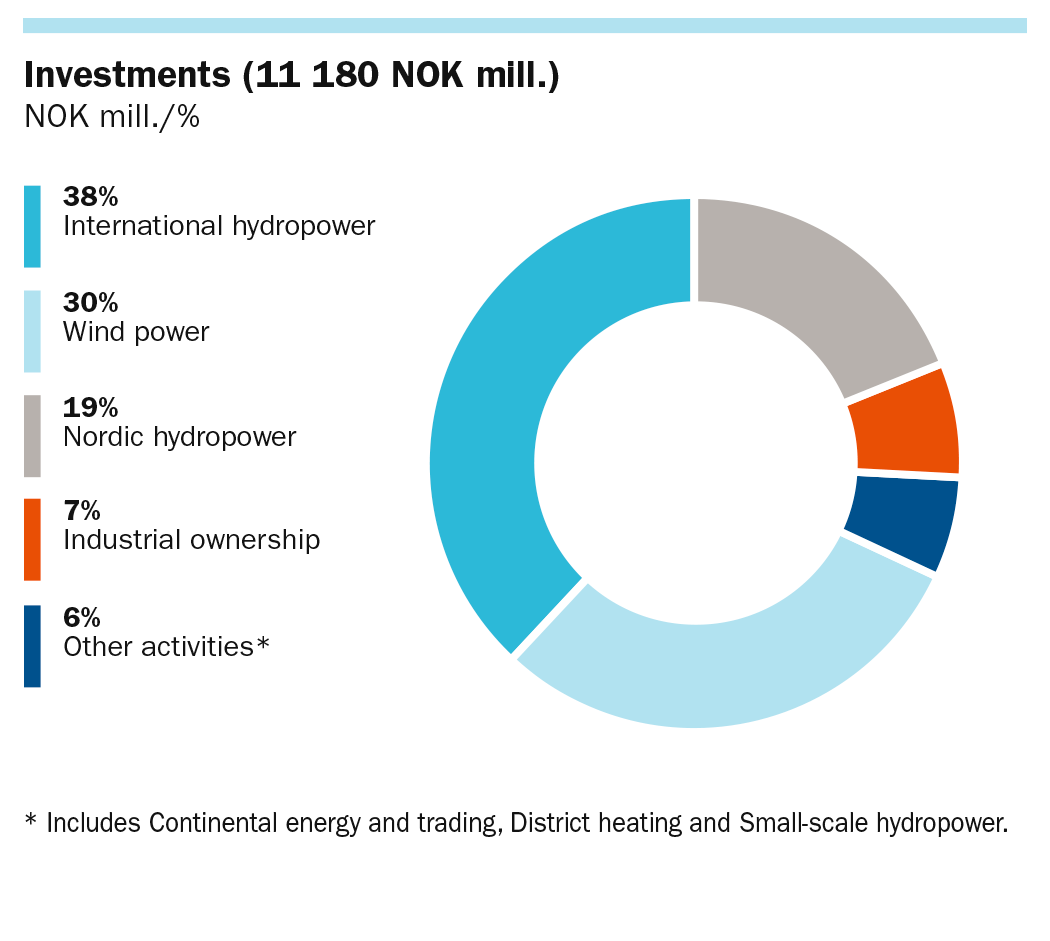 * Figures in parentheses show the comparable figures for 2013.

3) Net investments include investments paid at the end of the quarter, payments received from sale of non-current assets, net liquidity out from the Group upon acquisition of activities and repayment and disbursement of loans.