Most of Statkraft’s production is in the Nordic region, and 93% of the production took place in this market in 2014. The Group also has consolidated production (the production of investments which Statkraft fully consolidates in its accounts) in Germany, the UK, Turkey, Peru and Nepal.

In other countries, the Group is involved through associated companies and joint ventures. These power markets reflect the global economic trend towards a mature European market with low growth, and emerging markets with high growth. In spite of differences in the markets, all are influenced by global trends such as the prices of oil, gas and coal, climate change and associated policies, as well as
production costs.

Power markets in Europe are influenced by stagnating demand and the fact that the growth in renewable production capacity has resulted in less need for other power production. As a result of these two factors, power prices in Continental Europe are moderate and the price for carbon emissions has fallen to a low level. 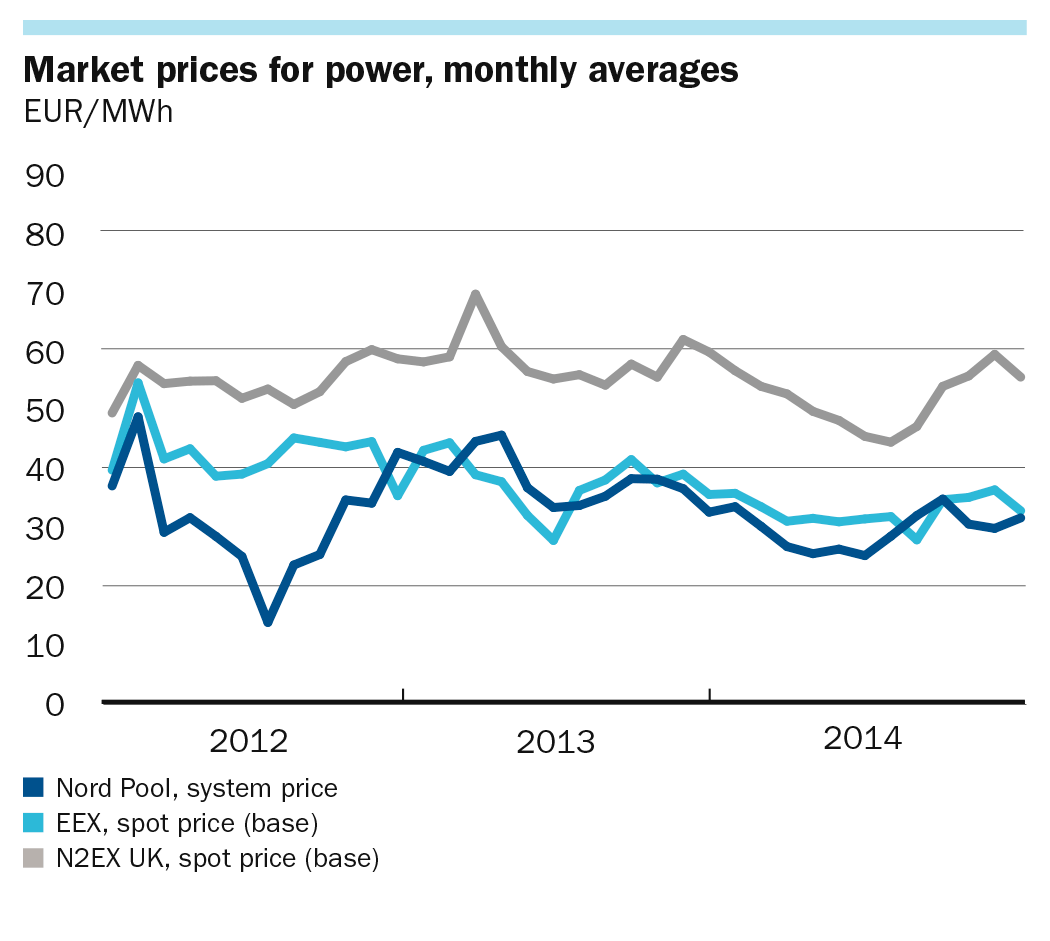 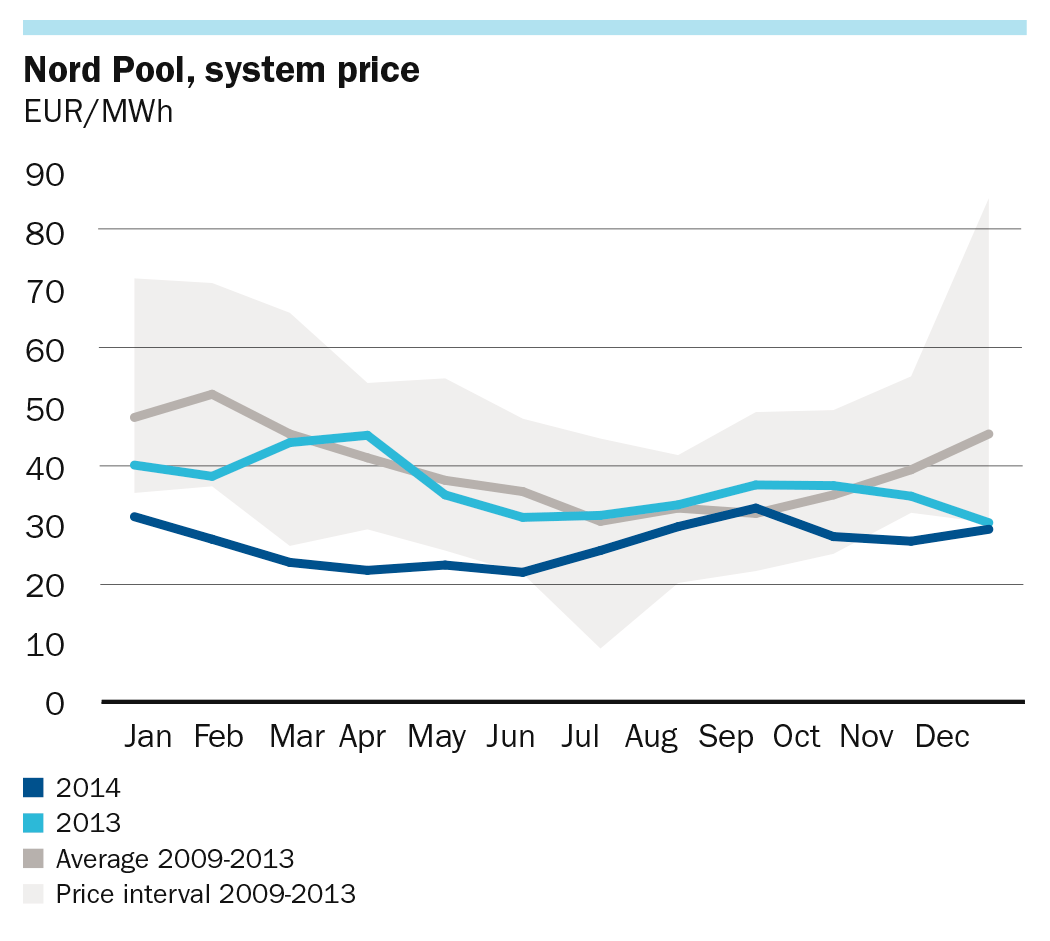 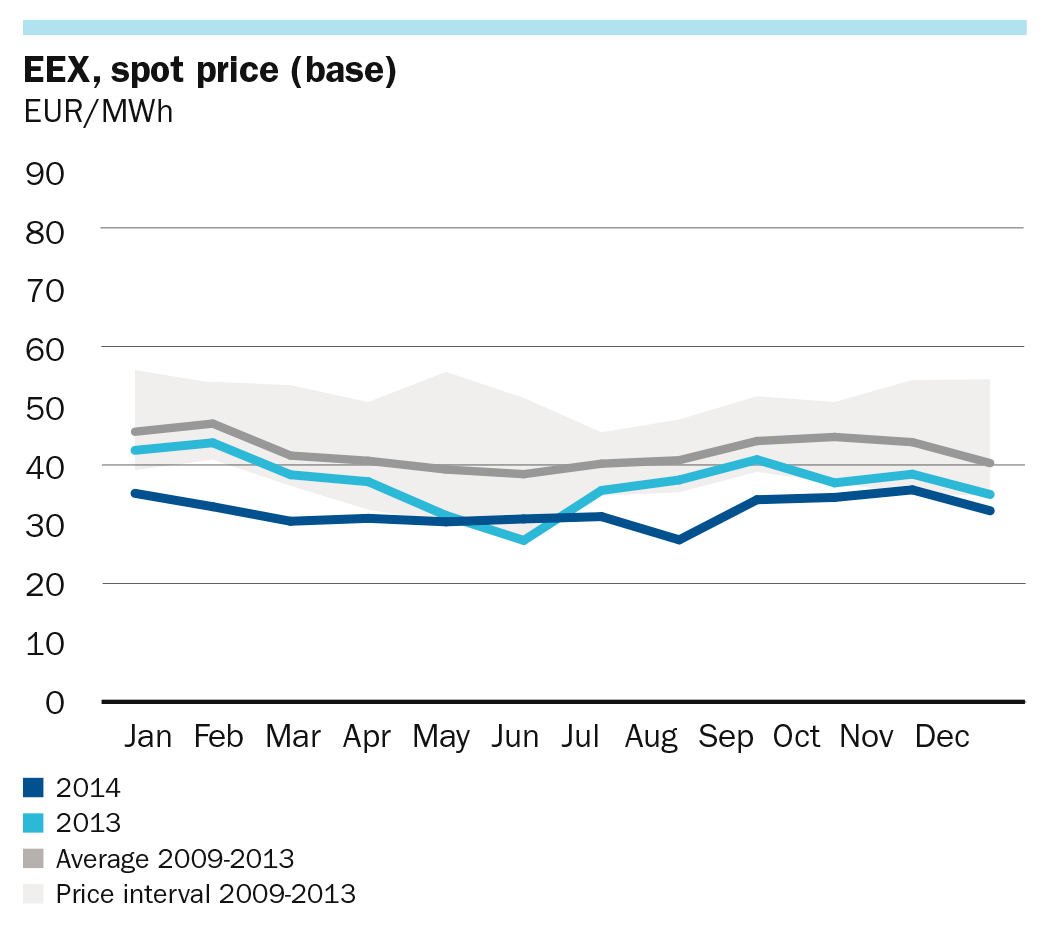 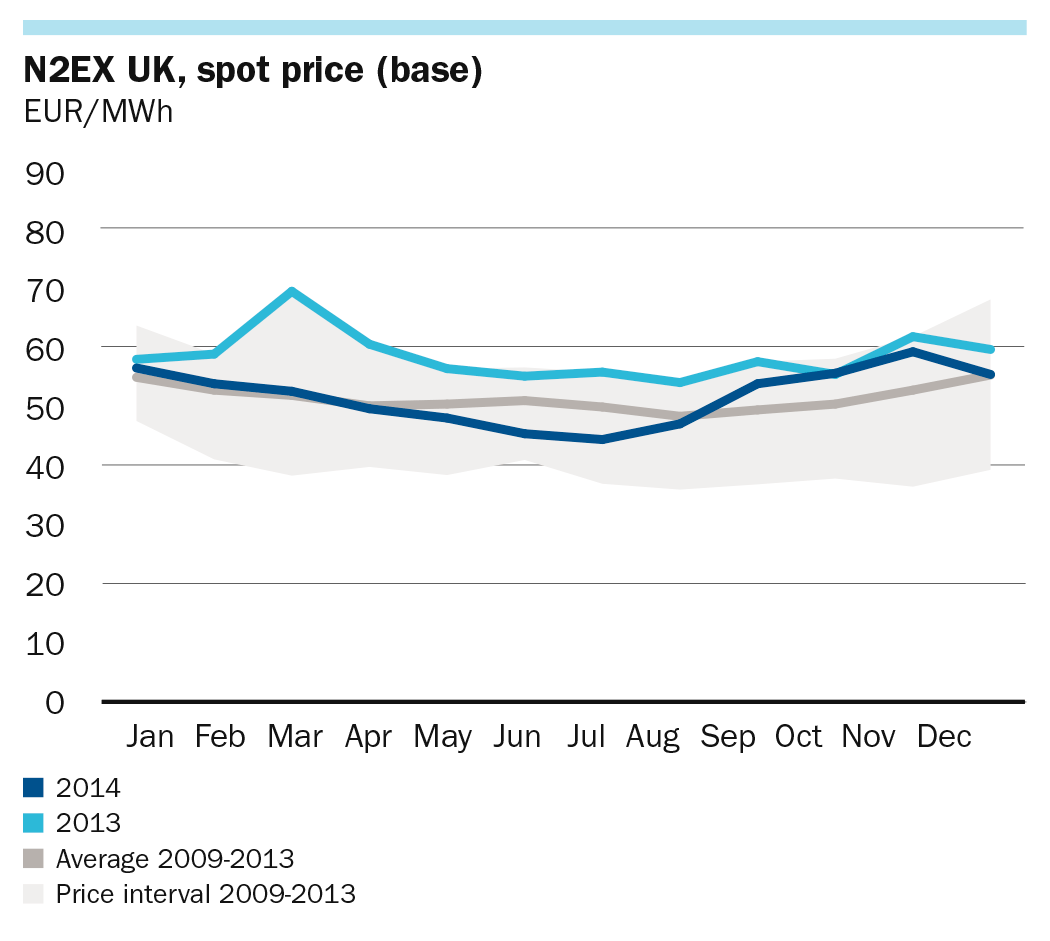 Power prices in the Nordic region in 2014 were affected by higher-than-normal temperatures. The water level hovered around the normal level throughout most of the year, and at the end of 2014 it was at 96% of the normal level. The average system price on Nord Pool was 29.6 EUR/MWh, 22% lower than in 2013 and 28% below the average for the 2009-2013 period.

Power prices in Germany were characterised by good access to non-flexible power production (solar and wind power) as well as relatively low coal prices. The average spot price (base) was 32.8 EUR/MWh, 13% lower than in 2013 and 24% below the average for the 2009-2013 period.

Power prices in Turkey are mainly determined by the gas price as gas contributes almost half the country’s power production. The average spot price (base) was about 56 EUR/MWh, a decline of about 5% from the preceding year. In local currency, however, the average price rose by 9%.

Power prices in India are still relatively low, about 45 EUR/MWh, mainly due to substantial growth in new thermal capacity and generally lower consumption growth in recent years. In Peru, prices are low in the spot market, but Statkraft has entered into several contracts with different maturities at prices above the spot prices. Power prices in Chile are still at a high level, as a result of dry years and low production from the country’s hydropower plants. Normalisation of hydrology and investments in solar power have led to lower prices in the last 6 months of 2014 (about 100 USD/MWh). In Brazil, extremely low inflow over the last 18 months has resulted in very high market prices, around 150-200 USD/MWh. In Nepal, power is sold through a power sales agreement with a fixed CPI-regulated price.

Statkraft’s production is determined by production capacity, demand, access to resources (hydrological balance and wind), spark spread (margin between power and gas price) and power optimisation. At the end of 2014, the consolidated installed capacity (the capacity that Statkraft fully consolidates in the accounts) was 16 401 MW, with hydropower contributing 13 273 MW, gas power 2600 MW, wind power 488 MW and bio power 40 MW. Consolidated installed capacity for district heating was 760 MW. Statkraft also has ownership interests in associated companies and joint operations with production capacity, and, overall, the Group has ownership interests in power plants with a total installed capacity of 18 159 MW power production and 714 MW district heating (Statkraft’s share of direct and indirect ownership).

The demand for power varies throughout the day and year, and the power markets are dependent on capacity that can be adjusted according to demand. Statkraft has a large percentage of flexible production capacity, and combined with extensive analysis and production expertise, this contributes to consistent, sound management of the Group’s water resources. The Group has an advanced power optimisation process and plans to have available power plants in periods with high demand. Statkraft’s large reservoir capacity with a combination of seasonal and multiple-year reservoirs enables the Group to manage the water resources in a perspective spanning more than one year. Accordingly, production can be kept high in peak price periods, but can be kept lower in low-price periods. 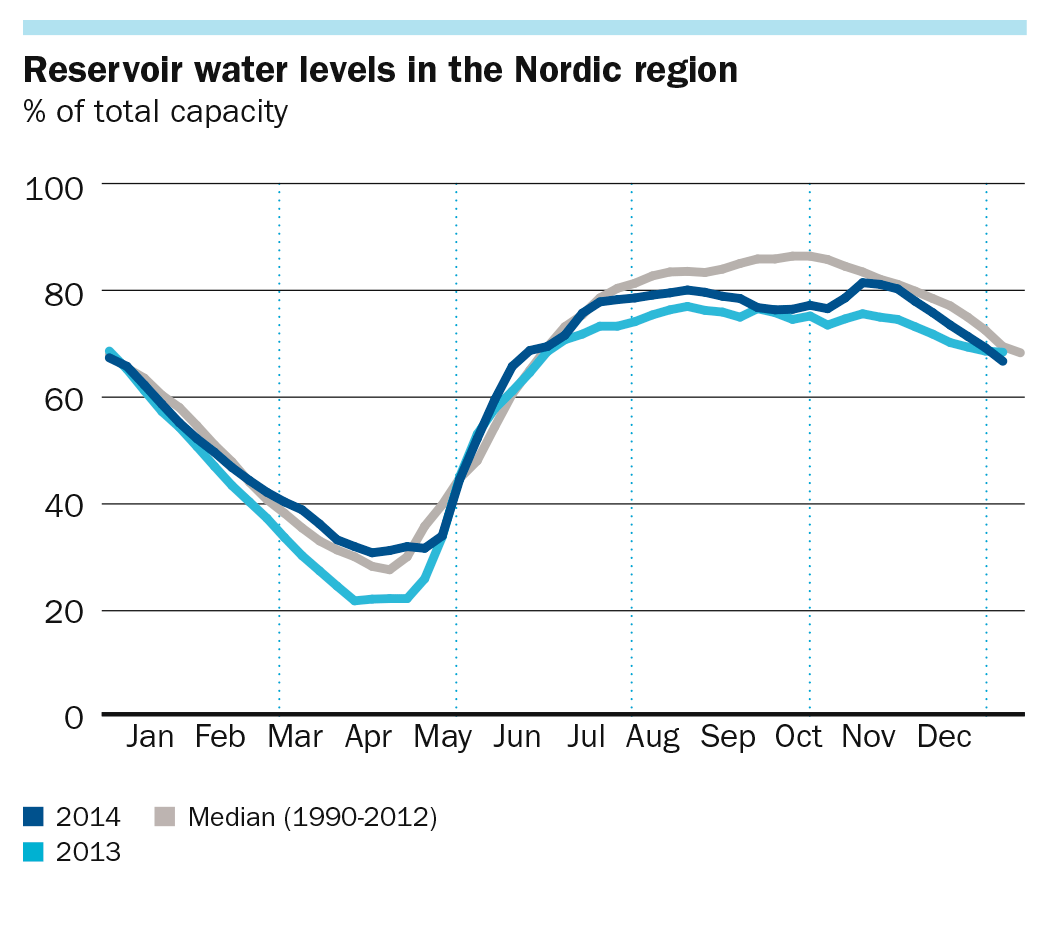 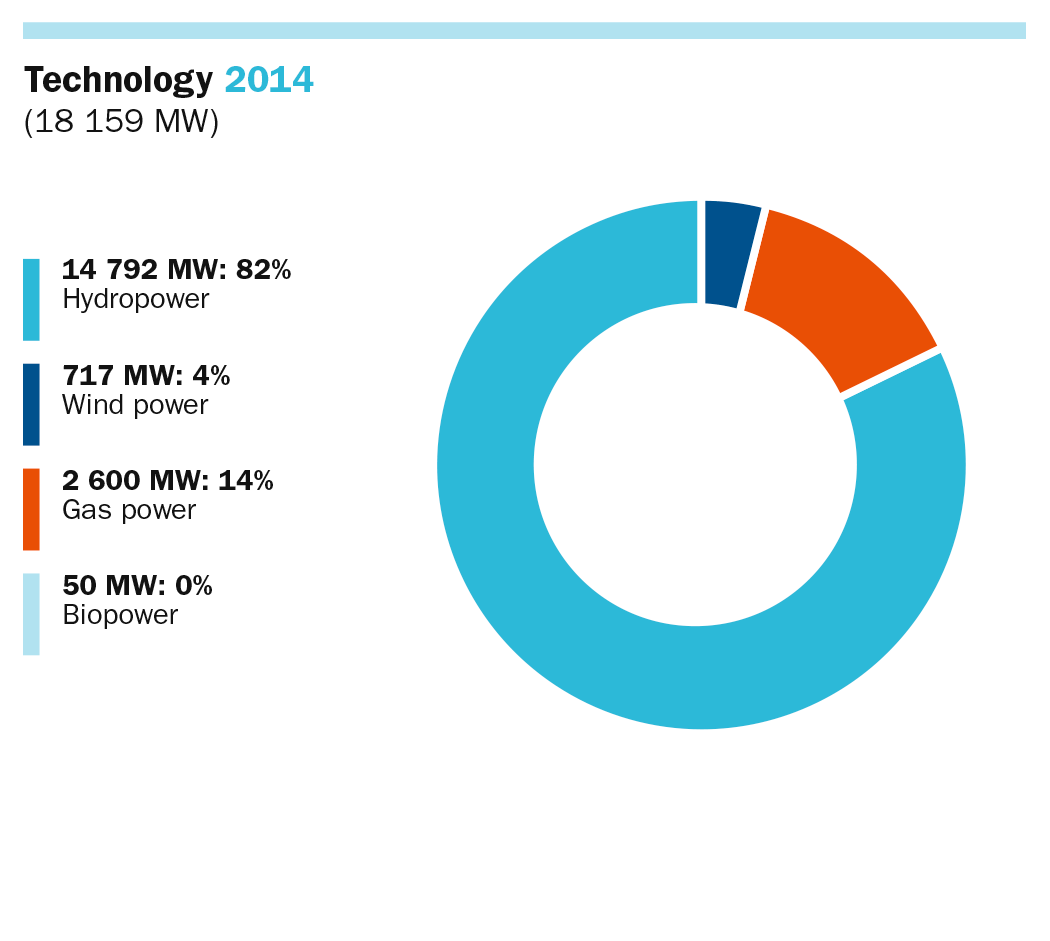 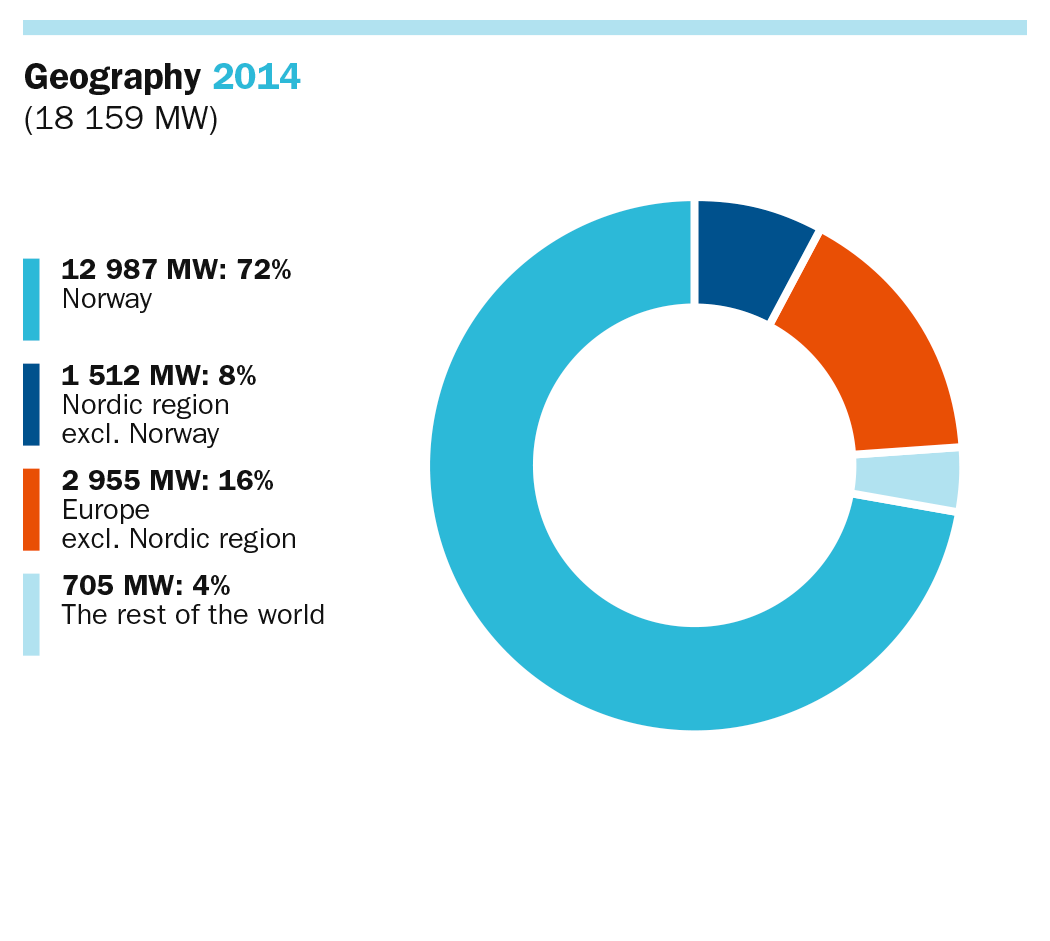 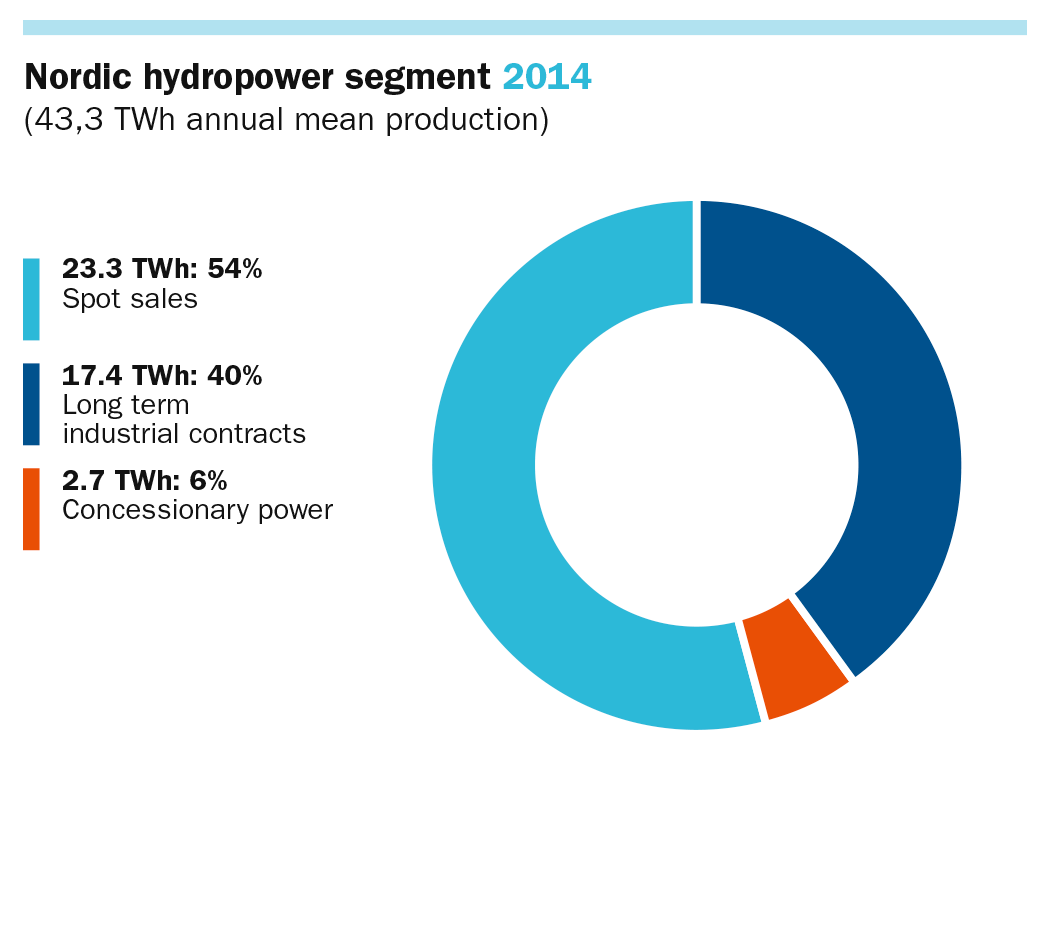 Spot sales are trading of electric energy with production and physical delivery taking place simultaneously at market price. The price is typically stipulated for a short time interval, for example for every hour of the day in the Nordic region. In 2014, the Group sold 33.3 TWh (32.5 TWh) in the spot market, which corresponds to 60% (58%) of the total production.

Statkraft is a major supplier to the power-intensive industry. In 2014, the volume delivered under long-term contracts amounted to 19.5 TWh, of which 17.4 TWh went to the industry in the Nordic region. The high contract coverage has a stabilising effect on Statkraft’s revenues. Most of the contract volume for Nordic industry runs until 2020.

In Norway, Statkraft is required to cede a share of the power production to counties and municipalities where the power is produced, so-called concessionary power. Explained briefly, the price for this power corresponds to the average production cost, and is thus significantly lower than the market price for power. The concessionary power volume amounted slightly less than 6% of the Group’s Nordic hydropower production in 2014.