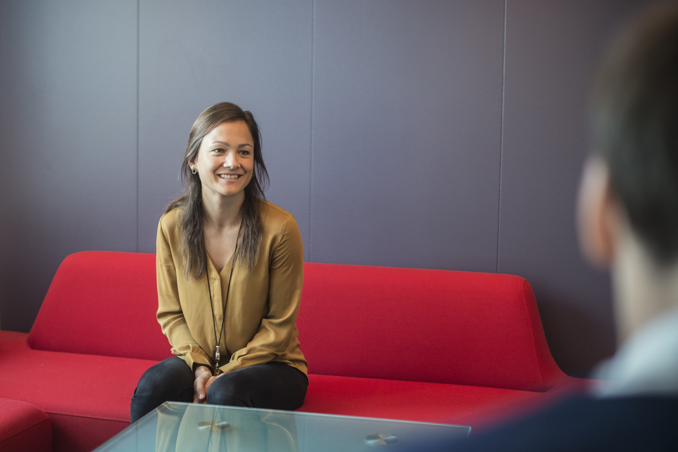 So what does it take to get accepted?

- My motivation is to contribute to a greener world and a green shift. It was not an option for me, to work for an oil company that has a little green on the side, says Lotte Løland (23), a recent graduate from the University of Life Sciences at Ås in Norway.
There she took a Master’s degree in Environmental Physics and Renewable Energy.

Last fall she passed the hurdle and got accepted as a Statkraft trainee.
In the group's innovation department, she is analyzing how new technology may affect the prospects for the energy sector in the coming years. The analyses are handed over to Statkraft's strategy departments.

- The energy industry is undertaking major changes. Individual consumers participate more actively in the market, by installing solar panels on their roof tops and becoming producers of their own electricity. Consequently, consumers are becoming less dependent on the power that Statkraft produces. We have to adapt to this development and Statkraft works actively to be relevant also in the future.
Major energy producers like Statkraft need to be on top of the development, when consumers become less dependent on the energy that we offer to the market, says Løland.

This characterizes the trainees in Statkraft
Many of Statkraft’s trainees have a background from engineering or economics, but the company also hires young and promising talents with other majors.

So what is the common denominator among today's trainees? A strong commitment to renewable energy and the task of solving the climate challenges. Interest in technology and solid academic performance.

Here you can read the Statkraft trainees’ blog!

Chinese-Amercian Jessica Li (26), a graduate from Norwegian School of Economics, is now preventing corruption in Statkraft, read about her career here.

Deployments worldwide
The trainee period is global. It is a two-year program tailored to each individual trainee that consists of four so-called rotations, where at least one is overseas.

Magnus Winther Westlie (28) from Konnerud in Drammen has virtually been around the world both during and after his trainee period. He works for Statkraft's subsidiary SN Power, which builds hydropower plants in Africa, Asia, South- and Central-America.

Westlie’s first deployment outside Norway was in the Philippines, and then we went to Panama, before spending little over a year in Peru. Now he works in the world metropolis Singapore.

- In Panama, I brought my partner with me, and the main reason for moving to Singapore after the trainee program was because of her opportunities to get a job. It is easier to get a relevant job in Singapore than in Peru, says Westlie.

Westlie has a background in industrial economics from Norwegian University of Science and Technology in Trondheim, and has always been interested in the link between economics and engineering.

In London, Statkraft has an office for the Group's global wind strategy. There, Daniel Christophersen (24) monitors how new battery technologies can revolutionize wind power.

Strict but fair
In addition to learning Spanish, Westlie has been taught a thing or two about business in countries very different from the Norwegian culture.

- Our contracts are written in good faith, based on Norwegian principles. It is challenging to manage the relations with foreign partners or suppliers that are used to more specific contractual agreements. You need to be on top of it, and summarizes his business philosophy to be "strict, but fair".

What is the best part of working for Statkraft?
- You work with renewable energy. Statkraft also set the standards high when it comes to sustainable development. We take care of the people and the environment when we develop major projects.

The application deadline for the trainee program in 2015 is October 19th.

This is how the selection process works:
Marie Butenschøn (27) is both a trainee and works with the trainee program, as her first rotation is in the Corporate HR department. She has a Master’s degree in Leadership and Organizational Psychology from the Norwegian Business School in Oslo. She explains what awaits hopeful applicants:

The candidates go through the following three steps in the selection process:
- First, each candidate meets representatives from the department that has announced the specific trainee position that the candidate has applied for. In the first interview, the candidate’s suitability for the position is assessed.
- If you get through the first round, round number two includes ability and personality tests.
Based on the outcome of the tests, you are invited to the third round or not.
- Candidates who reach the third round get a full day at our headquarters in Oslo, with individual and group exercises as well as more detailed interviews.