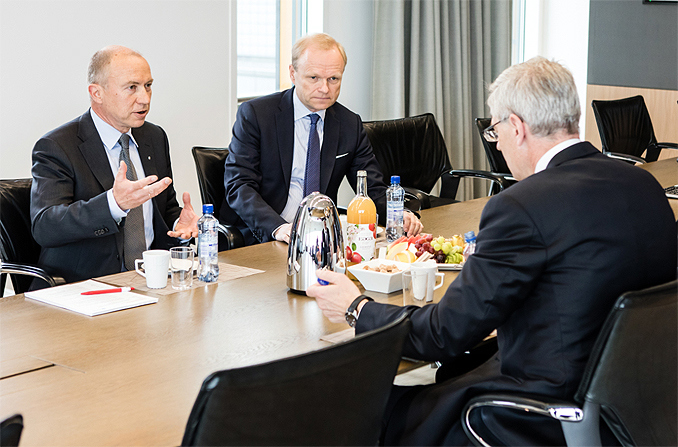 "We fully support the European Green Deal and the long-term climate neutrality target, and we are committed to lead the change towards a carbon neutral electricity sector," the CEOs of Fortum, Statkraft and Vattenfall write in a letter to the European Commission.

In the letter, which was sent on 10 December, the three CEOs congratulate Dr. Ursula von der Leyen with her inauguration as President of the European Commission and express their best wishes for a successful mandate.

"Putting climate change on top of the political agenda is urgent, and placing Europe in the lead of the global transition to a net zero economy shows political leadership," the CEOs state in the letter, adding that the Nordic countries have proven that decoupling CO2 emissions from GDP growth is possible and that climate action, competitiveness, security of supply and affordability of low-carbon electricity can be successfully combined.

The letter is a follow-up to the joint declaration presented by the CEOs of Fortum, Statkraft and Vattenfall in Brussels on 7 November, encouraging the EU to increase its climate ambition to match the Paris Agreement and enshrine the 2050 climate neutrality target in European Climate Law.

Based on this, a cost-efficient emissions reduction pathway with coherent intermediary climate targets for 2030 and 2040 needs to be established, the declaration stated.

The three Nordic utilities believe that carbon pricing is key for cost-efficient emissions abatement and climate financing. They recommend integrating the cost of CO2 emissions in the price of carbon-intensive products and activities wider in the economy. Extending the scope of the EU ETS to sectors such as heating and cooling and transport needs to be further evaluated.

In addition to emissions reductions, carbon dioxide will need to be removed from the atmosphere in order to reach carbon neutrality. CO2 removal technologies should be duly recognised in the legislation and be supported to achieve market maturity.

Fortum, Vattenfall and Statkraft see electrification as the most efficient, flexible and sustainable way to decarbonise the economy, in particular industry, transport, heating and cooling. This will be enabled through stronger interconnectors between regions, competitive low-carbon power supply and cross sectoral flexibility.

The Nordic utilities highlight that mastering the financial and social challenge of the energy transition is crucial for success. In order to succeed, costs and benefits have to be fairly distributed and no member state, consumer or citizen should be left behind.

"There is no going back to an era before climate change. Statkraft invests 100% of our growth in renewables and is Europe's largest producer of renewable energy. We call for an ambitious European Green Deal and we are ready for the challenge. We look forward to contributing to the specific design of appropriate measurements and with solutions in the power sector," said Statkraft CEO Christian Rynning-Tønnesen during the joint Nordic Coalition event in the European Parliament in Brussels on 7 November.