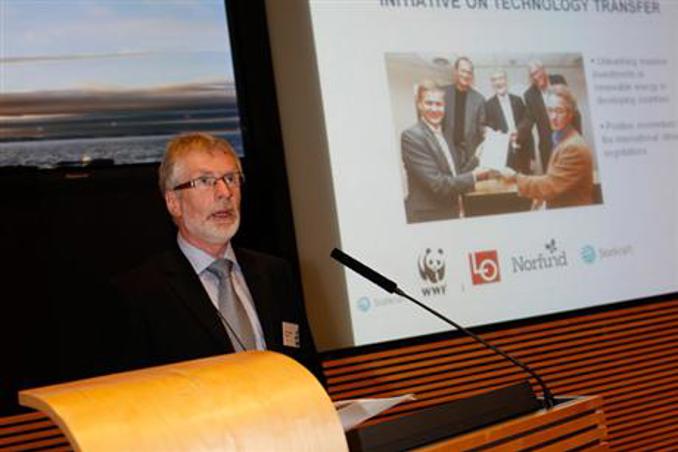 CEO and President Bård Mikkelsen opened the seminar before the boat departed for Tofte and the official opening of the osmotic power plant.

The opening of the prototype of the world’s first osmotic power plant kicked off with a seminar on renewable energy at Statkraft’s main office at Lilleaker, where the importance of the osmosis and membrane technology was put in a scientific and environmental perspective in presentations by NASA’s Michael Flynn and head of WWF Norway, Rasmus Hansson.

Head of Innovation and Growth, Sverre Gotaas, then gave an account of 40 years of technological development “from salt to electricity” which has lead up to Statkraft now being able to demonstrate production at the prototype at Tofte. Gotaas emphasized that cooperation is key to making this a new industry/commercially viable.
“We need partners and access to the best membrane researchers, also outside of Norway, to cooperate with our team in Statkraft,” Gotaas said. “Yes, we believe osmosis has a future. In 20 years, osmotic power should be as important as other renewable energy sources,” he said.

Membranes are used in other day-to-day operations as well, although not to make energy: Michael Flynn, Head of advanced water recycling technology at NASA, explained how osmosis is used as a water purification technology onboard space missions:
“Just like the globe we live on, a space station is a closed system, we are forced to recycle everything, in order to carry out space missions in an economically feasible manner. Water circulation is the link between Statkraft and NASA, but instead of using human waste Statkraft is using clean water to generate energy,” Flynn said, praising Statkraft for pushing the technology all the way to production.
“This places Statkraft well ahead of the competition. NASA is interested in the membrane technology and will extend our full support to Statkraft on the road ahead.”