With stars in their eyes 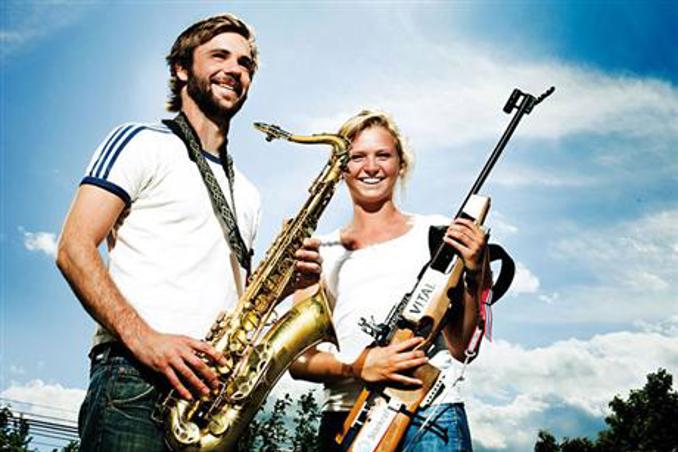 Thekla Brun-Lie and Jørgen Mathisen dream of different careers, but both get help from Statkraft to achieve success.

Jazz musician Jørgen Mathisen (24) and biathlete Thekla Brun-Lie (16) express their ambition in completely different ways, but have two things in common: They are among Norway’s best and brightest, and Statkraft is their sponsor.

When Jørgen Mathisen and his sax took the stage during the Oslo Jazz Festival last year, he knew that he had won the Statkraft Young Star Scholarship of NOK 50 000. However, he was less prepared for the jury’s reasoning.

“Jørgen Mathisen is a musician with enormous energy, and he is technically brilliant.”

- That was very nice to hear, especially considering that they picked me on their own initiative; this was not something I had put myself forward for, says Jørgen.

When Thekla Brun-Mathisen checked the National Biathlon Association’s website in late April, she discovered a familiar name under the heading “National teams 2009/2010” -- her own! The top of the same page read “Ole Einar Bjørndalen.”

- That felt great, says Thekla, who will be part of the younger juniors, women’s team. And it is no wonder that she is part of the team, following two gold medals and one silver medal in the Norwegian Championship, in addition to being the overall winner of the Norwegian Cup in her class. These are sure signs of extraordinary abilities.

Being picked for the national team or being discovered by the music community does not make anyone rich, a fact Statkraft sponsorship director Grete Ingeborg Nykkelmo knows all too well. She has won individual world championship gold medals in both cross-country (1985) and biathlon (1991).

- I know from my own career that the transition from being a junior to competing with established stars can be hard and can even seem impossible, she says. In such situations, a little financial support and extra attention can be what makes the athlete go that extra mile extra fast.

- Statkraft is very concerned with hiring good employees for the future, which is why we think it is important to contribute to the development of young talents through sponsorships and through our cooperation agreements in sports and culture. The fact that our Young Star program can help young athletes and performers develop further is just great!