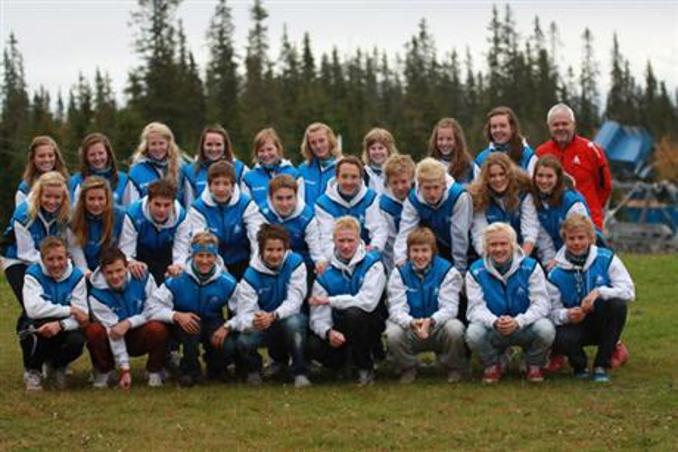 EXCITED BIATHLETES: The 1995 age group of Norwegian biathletes contain many exciting talents. There are probably one or more future stars in the…

Through the Young Star project, Statkraft is facilitating the emergence of future talents of the Tora Berger’s, Ole Einar Bjørndalen’s and Emil Hegle Svendsen’s calibre.

“It is important to us to have partners who focus on more than the elite athletes,” says Rakel Rauntun, general secretary of the Norwegian Biathlon Association. She makes it very clear that Statkraft’s involvement in the biathlon is important.

“We are completely dependent on using resources for recruitment. It is about training the stars of tomorrow, as well as ensuring flow of competence so that the clubs and districts can benefit from the expertise held by elite and national team coaches,” Rauntun says.

Through the Young Star project, Statkraft makes significant contributions.
“While many partners mostly focus on the elite levels, Young Star supports the Biathlon Association’s wish to channel funds to the junior levels. The day Berger, Bjørndalen and Hegle Svendsen decide to hang up their skis and rifles, new profiles will be ready,” she says.

Statkraft Young Star has now found its form. This is a targeted offer for girls and boys who will compete in the 16-year age group this winter. The primary selection criterion was their performance in the national race last winter. The results from the Statkraft Young Star were also significant. The best biathletes born in 1995 were invited to take part in three gatherings together with club coaches.

“During these gatherings we make use of some of our very best coaches in order to provide the recruits with an insight into what will be required and expected by those who have ambitions to be good seniors in a few years,” Rauntun says.

Roar Nilsen is a key player in the Statkraft Young Star project. Nilsen was involved in the rebuilding of the Norwegian biathlon team following the disappointing results during the Lillehammer Olympics. He now uses much of his time grooming promising teens.

“It is important to create good training venues, especially for girls and those who come from small clubs and districts. We know from experience that this could be decisive for their decision to continue with sports. A significant share of those who are good biathletes, also have potential to become very good in other sports. So it is important to follow them up and give them enough challenges. I think it is important to point out that we have had almost no drop-outs from the Statkraft Young Star project. This shows that we’ve done a lot of things right,” Nilsen says.

“What is your focus during the three snowless gatherings?

“In general, there is a lot of good work being done within the Norwegian biathlete community but we believe it is important to give these boys and girls a taste of what is needed to take those extra steps. Whether they want to make the extra effort is up to the individual athlete. There is a great difference in the physical and mental abilities of 15-year olds. Some have come far, while others have some ways left. Our most important task is to explain what they should be focusing on in their daily exercises. Compared with other biathlon nations we have the most to gain from improvements at the shooting range,”  Nilsen says.

Most of the recruits have been doing biathlons for five or six years, and it is important that they receive new impulses to help motivation.

“This is one of the reasons why we start most of our shooting sessions in the standing position. Our feedback is that the biathlon becomes more interesting because the girls experience something new. It is also great that we can have regional gatherings based on the same model. At the same time we hold coaches’ courses. The Biathlete Association has a so-called development echelon that the girls and boys are made familiar with. Everyone involved in the projects is also obliged to keep an electronic journal. It is posted online, with the names removed, so everyone can see how their competitors train. Hopefully, in 2020, we can go back see how the champions trained as 15-year olds,” Nilsen says.

Grete Ingeborg Nykkelmo is Statkraft’s extended arm into the project. The former cross country and biathlon world champion, adds that Statkraft is very much concerned with the recruitment aspect.

“The collaboration with Norwegian Biathlon Association is both important and relevant for us. There are many similarities between what is happening in Statkraft and in this project. It is about attracting the best talents, and then developing them further. At the same time, we emphasise the need for flow of competence into the local communities,” Nykkelmo says.