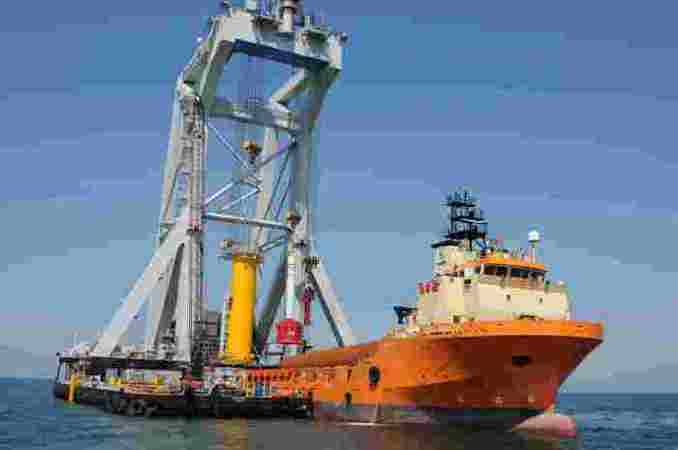 The first foundation for the 317MW Sheringham Shoal Offshore Wind Farm has now been installed on the wind farm site, off the coast of Norfolk in the UK.

The monopile was installed by the twin-hulled heavy lift vessel “Svanen”, which has been used for similar operations at other offshore wind farms. The transition piece was then lifted into place completing the project’s first full foundation installation. MTHøjgaard is the contractor managing the overall foundation engineering, fabrication and installation process.

For the next nine months, the “Svanen” will continue to install the remaining 89 foundations in preparation for the installation of the two substations and 88 wind turbines in 2011.
Each foundation consists of a tubular steel monopile, driven 32-36 metres into the seabed, and a bright-yellow transition piece mounted on top. The monopiles are between 50 and 55m long and weigh from 400 to 600 tonnes while the transition pieces are 22m high and weigh about 200 tonnes each.

The monopile and the transition piece were brought to the site from the Netherlands on the 87m “Toisa Sonata”. The foundations will now begin to arrive in a sequential order, and be installed in a pre-determined pattern, each one having been designed and fabricated specifically for its installation site.

The “Nordnes” has recently completed its rock placement process to ensure scour protection was in place at the foundation locations where it was needed prior to the start of their installation.

- This is a major milestone for the Sheringham Shoal project, said Bjørn Drangsholt, Head of Offshore Wind Power in Statkraft.

The Sheringham Shoal Offshore Wind Farm is owned equally by Statkraft and Statoil through the joint venture company Scira Offshore Energy Limited. Statoil is the operator for the project during the development phase. Scira will be the operator of the wind farm.