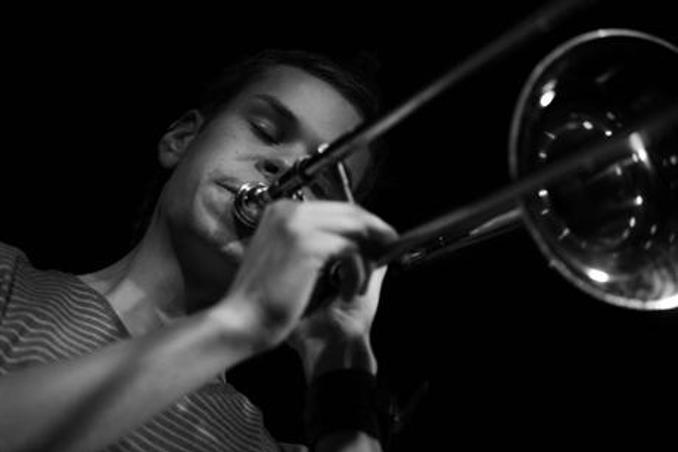 Trombone player and band leader Kristoffer Kompen was awarded this year’s Young Star scholarship of NOK 50,000. He was presented with the award during the Oslo Jazz Festival on Friday 20 August. The award is financed by Statkraft.

This forms part of the citation from the jury upon which they have presented the NOK 50,000 Young Star scholarship to a young talent on the Norwegian jazz circuit.

A creative bearer of traditions and performer, the jury writes on in its citation. According to the statutes, the award shall be presented to a performer of jazz/rhythmic music, aged between 18 and 25 years, who has made a special impression locally, regionally and nationally.

The jury’s citation for the presentation of this year’s Young Star scholarship:

"This year’s award winner is a musician who in recent years has emerged as a very active and distinct performer on the Norwegian traditional jazz scene. The award winner has made his mark as an enthusiastic person in a very active environment in Oslo, and he plays and increasing number of concerts both in Norway and abroad. As a musician, the jury views the award winner as a creative bearer of traditions and a performer who enjoys a lot of respect in a broad field of musicians and audiences alike. Through new bands and composite projects, the award winner has been a central performer at the same time as he also has been an important driving force and organiser for establishing and continuing these composite projects. One example is the Swedish-Norwegian bonding “Union Rhythm Jazz Kings” we heard during the 2008 Oslo Jazz Festival, and not least the new project "Tribute to Ella Fitzgerald" with the composite "Kaba Orchestra", which we could hear during this year’s festival. In the spring of 2011, a record by the fairly new band "Kompen quintet” will be released. Those who have not heard excerpts from this recording, can really look forward to the release, and it will be very exciting to see what the future holds for this very promising musician."