Mörttjärnberget wind farm, part of one of the largest wind power investments in Sweden, was inaugurated 4 May. The park consists of 37 wind turbines, expected to produce about 280 GWh a year, which corresponds to household electricity in 56,000 Swedish villas or 140,000 apartments.

Mörttjärnberget is located in the municipality of Bräcke, and SEK 1,5 billion have been invested in the construction. The park is run by Statkraft SCA Vind AB (SSVAB) which is co-owned by Statkraft and SCA, with the former holding 60 percent of the shares and the latter holding 40 percent.

"We are pleased that wind park Mörttjärnberget is now in operation," says Jakob Norström, CEO of SSVAB.

"It has been a long process during which we have felt a great support from the municipality, the local industry and the public. Statkraft is Europe's leading company when it comes to renewable energy and has over the last few years invested SEK 8,8 billion in wind power in Sweden. SCA have high ambitions for wind power development, and as Europe's largest private forest owner, SCA has good locations for wind turbines in the forests in the north of Sweden. This cooperation is an important step in the efforts for a more sustainable future."

Mörttjärnberget is part of a larger project of establishing wind parks in the regions Västernorrland and Jämtland, which is one of Sweden's greatest investments in wind power.

Also, the wind parks Bodhögarna and Björkvattnet are being planned.

The completed and ongoing parts of the project include a total of 186 wind turbines that will contribute with 1,6 TWh electricity a year. This renewable energy, which can replace fossil fuels, reduces the carbon emissions with over a million tonnes a year. 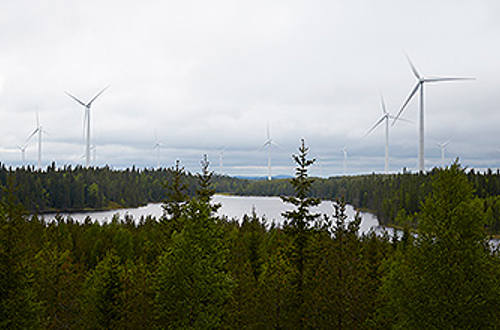