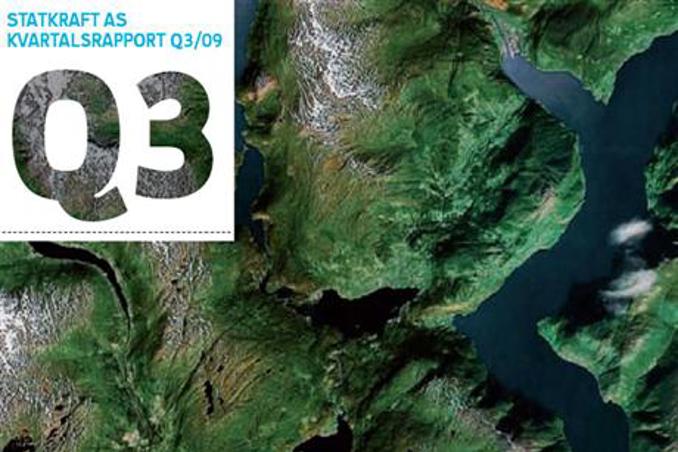 (Oslo, 12 November 2009) Statkraft's underlying profit before tax was NOK 6668 million in the first three quarters of the year (NOK 8419 million) , and NOK 888 million in the third quarter (NOK 1698 million). The year-to-date underlying profit after tax was NOK 3559 million (NOK 5205 million), and NOK 233 million (NOK 693 million) for the quarter. The result is influenced by lower power prices than last year. The Group will now implement measures to adapt to the weaker market outlook and the company’s capital situation.

"Statkraft's results reflect a demanding market situation. Weaker market outlook, combined with the fact that the capital situation remains unresolved, will result in the implementation of measures to safeguard the Group's financial strength. We are currently considering extraordinary efficiency measures to increase short-term profitability. We will also be revising the investment plans - depending on the final outcome for the application for stronger equity and an amended dividend policy. In addition, we are considering a restructuring of the balance sheet in the intermediate term," says President and CEO Bård Mikkelsen.

Statkraft's result for the first three quarters of the year has been influenced by lower prices. However, the incorporation of new activities from the asset swap with E.ON AG and the consolidation of SN Power are positive contributions. Operating revenues increased as a result of these transactions, but lower power prices have resulted in a lower capacity utilization and the Group’s income has consequently not experienced the same relative growth compared to that of the costs in the Group.

The power prices in the Nordic and German markets during the first three quarters of the year were 34.5 EUR/MWh (42.7 EUR/MWh) and 38.9 EUR/MWh (65.1 EUR/MWh), respectively. The prices are characterized by lower demand - particularly in energy-intensive industry - and lower commodity prices on the Continent.

The reported accounts have been influenced by large unrealised changes in value and the year-to-date unadjusted accounting result after tax is NOK 5938 million (NOK 4599 million), and NOK 2645 million during the quarter (NOK 1381 million).

Important events during the quarter

In August, Statkraft and the Swedish forest industry company Södra signed a letter of intent relating to renewable energy. The agreement includes all electricity deliveries to the Södra group in Norway, development and construction of wind power at Södra's properties in Sweden, construction of Sweden's longest residual heat pipeline and supply of biofuel from Södra to Statkraft's district heating plants in Sweden. The projects in this portfolio have an investment potential of up to NOK 8.5 billion leading up to 2017. On 1 October, a wind power cooperation agreement was signed, which entails that Statkraft will buy 90.1% of Södra's wind power development company. The activities will be continued in two companies, one for investment, ownership and operation, where Statkraft will own 90.1% of the shares, and one for early-phase project development, where Statkraft will own 40% of the shares. The portfolio contains projects in various stages of development, with an overall potential of about 608 MW of installed capacity and an annual production of 1.6 TWh.

On 16 September, Trondheim Energi and TrønderEnergi agreed on the principles for a grid merger in Sør-Trøndelag County. The companies have started commercial negotiations with a shared intention of merging the grid companies Trondheim Energi Nett and TrønderEnergi Nett. The merger will be implemented by TrønderEnergi, from the assumed merger date on 1 January 2010, buying shares to increase its stake to 51% in the merged company, and at the same time committing itself to buying the remaining 49% of the company from 1 January 2013.

On 24 September, Statkraft and the Italian company Solar Utility SpA signed an agreement for the acquisition of eight ready-to-build solar power projects in the Puglia region in southeast Italy. The projects have a total capacity of almost 20 MW, and represent the first step towards an ambition to develop a nexus for renewable energy in Italy.

In the third quarter, Statkraft and the Scottish company Duke Energy received a license for the construction of the Berry Burn wind farm (Statkraft ownership 50%) in Scotland. The park will consist of 29 turbines with a total installed capacity of up to 78.3 MW.

Elkem and Statkraft have agreed on the framework for a joint energy recovery project for the silicon smelting plant at Thamshavn in Orkanger in Central Norway. Following a pledge of financial support from Enova, the Norwegian state agency for the promotion of green energy, a joint venture agreement was signed in September. The parties will collaborate on a main study that will form the basis for an investment decision in the first half of 2010.

All physical installations for the prototype osmotic power plant at Tofte have been completed. The installation underwent successful testing on 2 October, and the official opening will take place on 24 November. A continuous effort is underway to further develop membranes in cooperation with a number of external partners.

The power sales company Fjordkraft's customer centre has won the energy industry award for best customer service. The award is a result of a comprehensive test of the customer service in 56 companies from nine different industries.

1)Adjusted for unrealised changes in value and significant non-recurring items in the Group and associates.
2)Figures in parentheses show comparable figures for the corresponding period in 2008.

Statkraft is Europe's largest producer of renewable energy. The Group develops and produces hydropower, wind power, gas power and district heating, and is a major player on the European energy exchanges. Statkraft also develops solar energy, marine energy, osmotic power and other new energy solutions. Through ownership in other companies, the Group supplies power and heating to about 600 000 customers in Norway. In 2008, the Group achieved sales of NOK 25.1 billion and an underlying profit after tax of NOK 8.1 billion. Statkraft has more than 3200 employees in more than 20 countries.