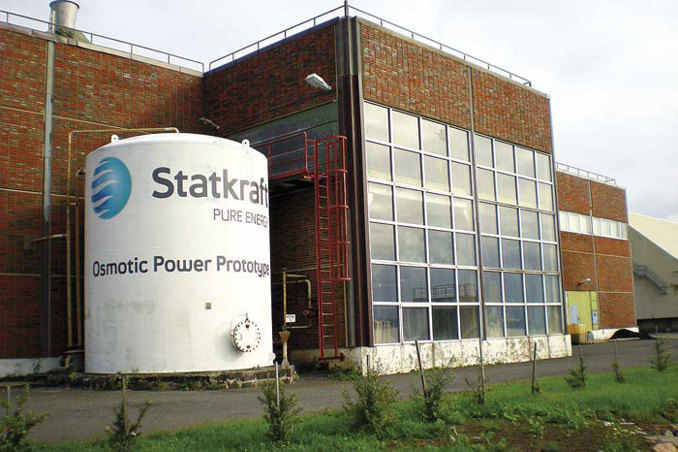 The prototype generates power by exploiting the energy available when fresh water and seawater are mixed. Osmotic power is a renewable and emissions-free energy source that Statkraft has been researching into for 10 years and that will be capable of making a substantial global contribution to eco-friendly power production.

“This new technology generates electricity simply by mixing water. New solutions to meet the climate challenges might be closer than we expect, which makes me confident that the future looks bright,” says Statkraft CEO and President, Bård Mikkelsen.

“I want to congratulate Statkraft with the opening of the osmotic power prototype. Innovative energy solutions are essential to meet the climate challenges, and I am pleased that a Norwegian company is a front runner in developing these technologies,” says Terje Riis-Johansen, Norwegian Minister of Petroleum and Energy.

“We appreciate that a major company like Statkraft invests in new, renewable solutions. We will work together with Statkraft to secure that the solutions also are sustainable solutions, says Rasmus Hansson, CEO of WWF Norway.

The prototype will have a limited production capacity and is intended primarily for testing and development purposes. The aim is to be capable of constructing a commercial osmotic power plant within a few years’ time.

The global potential of osmotic power is estimated to be 1,600-1,700 TWh per annum, equivalent to 50 percent of the EU’s total power production. Osmotic power plants can, in principle, be located wherever fresh water runs into the sea; they produce no noise or polluting emissions and they can be integrated into existing industrial zones, for example, in the basements of industrial buildings.

Statkraft has been researching osmotic power since 1997 and has developed this prototype in cooperation with R&D organisations from many countries. The project has attracted a lot of international interest, and several foreign guests are attending the opening.