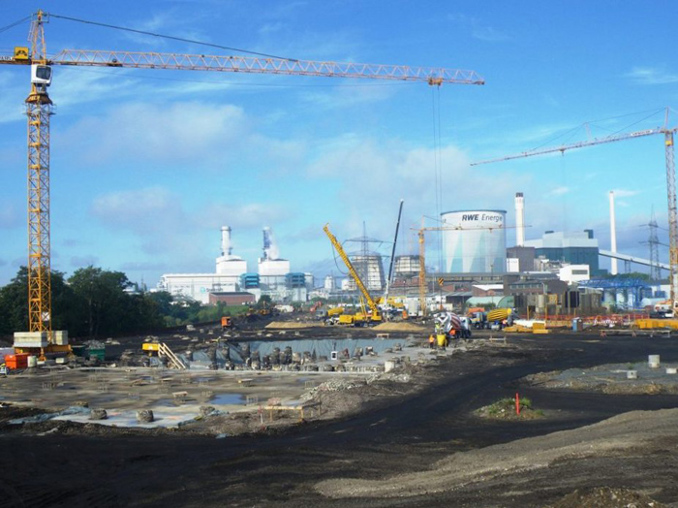 Hürth-Knapsack, 30 September 2011 – At a groundbreaking ceremony, Statkraft, Europe’s largest producer of renewable energy, today announced the start of construction of a second combined gas and steam turbine power plant (CCPP) at the Hürth Knapsack site. In addition to representatives of the company, State Secretary Jochen Homann from the Federal Ministry of Economics and Marc Jan Eumann, Parliamentary Secretary for Federal Affairs, Europe and Media of North Rhine Westphalia, also attended the ceremony.

‘With the change in energy policy, Germany will face particular challenges. Wind power and photovoltaic alone cannot guarantee the security of supply because large-scale storage does not exist. Combined cycle power plants are extremely flexible. If wind and solar power are not sufficient, the CCPP can be ramped up relatively quickly and can balance peak loads,’ explains Dr. Horst Kesselmeier, Vice President of Project Development at Statkraft. ‘At the Knapsack site, a highly modern combined cycle power plant is being built that can respond optimally to these specific requirements.’

The proposed plant with a generating capacity of about 430 MW and an efficiency of nearly 60 percent is one of the world's most modern gas and steam turbine power plants. After the completion in 2013, the plant will supply up to 500,000 households with electricity. Statkraft has been operating a combined cycle power plant with a total capacity of 800 MW in Knapsack since 2007 and employs about 70 people. After the completion of construction, approximately 10 additional employees will be hired.

Statkraft views the new plant as a contribution to the successful change in energy policy and advocates bolstering the competition in the German electricity market. However, the company clearly disagrees with the current debate about the necessity for a new market model: ‘We do not need less, but more competition on the market,’ urges Dr. Jürgen Tzschoppe, Senior Vice President of Continental Energy at Statkraft. ‘We support the transformation of Germany's production landscape, but it has to follow market economy principles. The EEG is a success story. However, thereby an ever-increasing share of energy production is being steered by a planned economy.’ Asbjørn Grundt, Executive Vice President Market Operations & IT adds: ‘The consequences are price distortions and uncertainty on the part of market participants who are willing to invest. Through subsidies or unbalanced implementations of capacity markets, investors with a natural interest in stable market rules are deterred once and for all. Especially these new investments in energy generation and intelligent measures are needed urgently.’

Dr. Torsten Amelung, Senior Vice President, Trading & Origination outlines a possible solution to the regulatory impasse: ‘Subsidised power plants as balancing capacity for subsidized green electricity are not the solution - the rapid market integration of renewable energies is. Investments in advanced solutions will only be made if outdated and polluting power plants are forced out of the market. Prerequisite for this is an electricity market that reflects the actual production. If the state regulates the price of electricity permanently, the market cannot send any signals for investments.’

About Statkraft:
Statkraft is Europe's leader in renewable energy. The group develops and generates hydropower, wind power, gas power and district heating, and is a major player on the European energy exchanges. Statkraft has more than 3,300 staff in more than 20 countries.