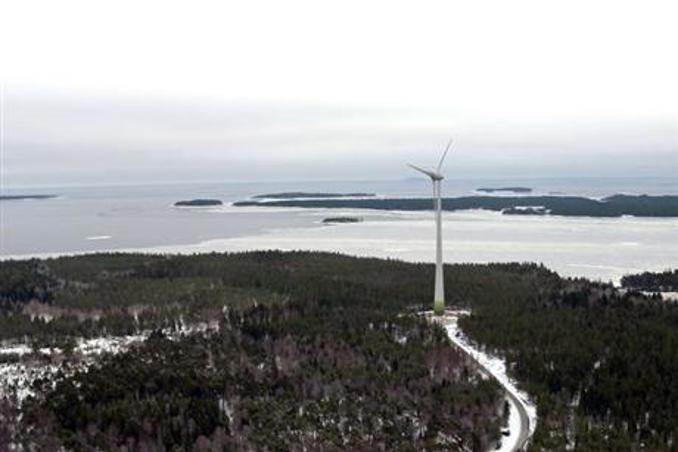 Today, Statkraft’s first wind farm opens in Sweden. The wind farm Em is the first concrete result of a comprehensive collaboration between Statkraft and the forestry and timber product company Södra.

(PRESS RELEASE - Oslo/Mönsterås, 9 March 2011) Em wind farm, Statkraft’s first wind power facility in Sweden, is officially opened today. The facility is outside Mönsterås in southeast Sweden, and is comprised of four wind turbines with a total installed capacity of 9.2 MW. The construction commenced in June of last year and was coordinated with the construction of Södra’s wind farm project at Mönsterås Bruk.

“We are excited to be opening our first wind farm in Sweden, which is a core market for Statkraft’s focus on land-based wind power. At Em, the conditions for wind power are in place, with good wind resources, easy connection to the grid and regulatory framework conditions which make it lucrative to invest in pure energy,” says Executive Vice President Jon Brandsar from Statkraft.

The wind farm is a result of the cooperation agreement with the forestry and timber product company Södra, entered into in 2009. The agreement involves development of about 600 MW wind power in southern Sweden.
In addition to the projects in the south, Statkraft is also cooperating with forest owner SCA regarding wind power development in central Sweden. Statkraft SCA Vind AB has applied for six wind farm licenses with a total installed capacity of 1140 MW in Jämtland and Västernorrland. Cooperating with the SCA also involves a significant industry power contract for the group’s paper mill in Sundsvall.

Statkraft already owns and operates three wind farms in Norway and one in Wales. The company has a number of wind power projects under development, both in Norway and in the UK. Statkraft and Statoil are in the process of constructing the Sheringham Shoal offshore wind farm off the English coast, and have been granted a license to develop Europe’s largest offshore wind zone on Doggerbank through the consortium Forewind.

Statkraft is Europe's leader in renewable energy. The group develops and generates hydropower, wind power, gas power and district heating, and is a major player on the European energy exchanges. Statkraft has more than 3 200 staff in more than 20 countries.