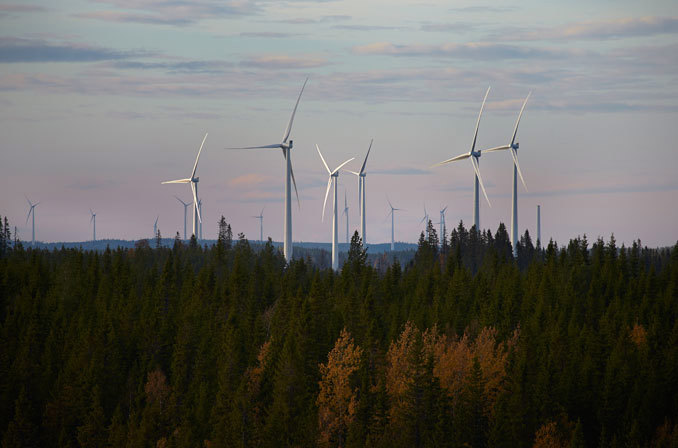 The wind farms are situated in Ragunda, Sollefteå and Strømsund municipalities and will be operated by Statkraft SCA Vind AB, SSVAB, in which Statkraft holds a 60 per cent ownership interest and SCA the remaining 40 per cent.

Björkhöjden and Ögonfägnaden are two of a total of four wind farms located in the two neighbouring counties Västernorrland and Jämtland, that together make up one of the most substantial wind power projects in Sweden. In 2013 the Stamåsen wind farm (26 turbines) came online, followed by the farm Mörttjärnberget (37 turbines) in 2014. All in all, the four farms are expected to deliver up to 1.6 TWh annually – about 10 per cent of all wind power generation in Sweden.

Around 230 local businesses were involved during the construction phase, which required more than 1.6 million man-hours equalling 1 000 full-time employees in one year. The operations organisation comprises 30 employees. Annual production of the four wind parks will be 1,6 TWh with an installed capacity of 514 MW.

In Norway, Europe's largest onshore wind power project in Central-Norway, Fosen Vind, is being realised by Statkraft, TrønderEnergi and Nordic Wind Power DA. Fosen Vind comprises of six onshore wind farms, with a combined capacity of 1000MW. The total investment in the wind farms amounts to approximately EUR 1.1bn. Construction has started  and commissioning will be completed in 2020.