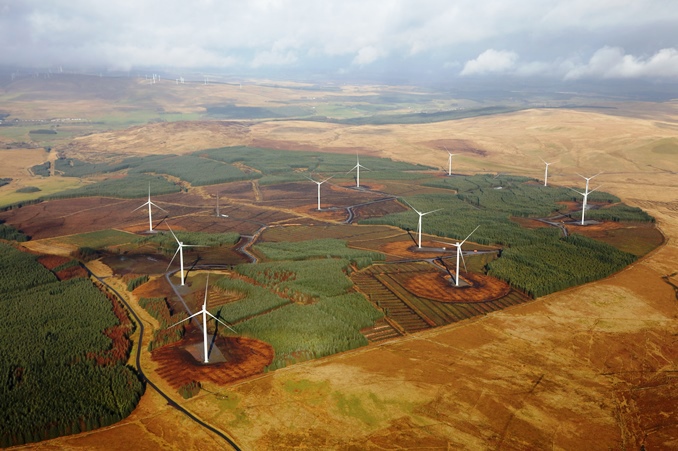 The wind farm consists of 11 Vestas V117 wind turbines which were delivered in parts to Inchgreen Dock near Greenock and King V Dock near Braehead. The various components were then transported as separate loads and assembled at site between July and October 2016.

The construction of the wind farm has been a boost to the local economy with around £2.5 million being spent in the region on items ranging from aggregates, to steel, transport and local plant and machinery hire.

Around a third of the workforce on site during construction came from South Lanarkshire and 3 full time jobs have been created in the region to support operations.
Now fully operational, Andershaw Wind Farm will make a valuable contribution to Scotland's ambitious renewable energy targets, providing clean electricity to meet the needs of approximately 23,400 homes annually.

"The completion of Andershaw Wind Farm marks the culmination of several years of effort to safely and responsibly deliver this large energy project. I'm especially pleased at the success we've had delivering regional economic benefits from the construction activity."

During the life of the wind farm Statkraft will pay £2.2 million into the South Lanarkshire Renewable Energy Fund as a way for the project to provide meaningful financial assistance to local projects and initiatives. The fund is already open for applications from nearby groups, societies and organisations.

A further £800,000 will be spent on a Forestry Habitat Management Plan to restock the site with mixture of conifers and native woodland to encourage local biodiversity.
The project is Statkraft’s third onshore wind development in Scotland, and follows on from the successful construction of the 52.5 megawatt Baillie Wind Farm and the 66MW Berry Burn Wind Farm, which became operational in 2013 and 2014.

Statkraft is a leading company in hydropower internationally and Europe's largest generator of renewable energy. The Group produces hydropower, wind power, gas-fired power and district heating and is a global player in energy market operations. Statkraft has 3800 employees in more than 20 countries.

Statkraft became the sole owner of the Andershaw in October 2014 after acquiring Duke Energy Renewables' 50% share in the project.