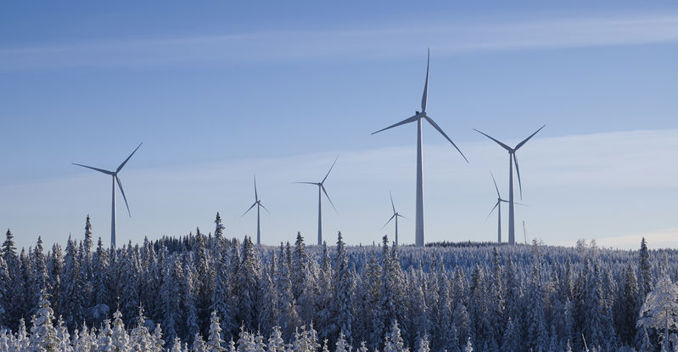 Stamåsen is one of the wind farms developed by Statkraft and SCA.

(Stockholm, 5 April 2017) To streamline their respective roles as land owner and power producer, SCA and Statkraft have agreed to restructure their collaboration in the wind power sector.

Statkraft will now be the sole owner of the company Statkraft SCA Vind AB (SSVAB) and moving forward SCA will be remunerated for its lease of land. The restructuring agreement optimises the structure and the roles in the collaboration.

SSVAB was established by Statkraft and SCA in 2007 with the purpose to develop wind power on land owned by SCA in the Norrland region, in northern Sweden. SSVAB has built four wind farms, totalling 186 wind turbines and 1.6 TWh in annual production. Statkraft owns 60 per cent of the company and SCA the remaining 40 per cent.

"When we initiated the collaboration in 2007, we were pioneers in establishing industry-scale wind farms in the forests of the Norrland region. The close collaboration between a power producer and a land owner was valuable. As the building phase is now finalised, it makes sense to leave our project organization and continue the cooperation in a more long-term form," says Milan Kolar, Manager Wind Power at SCA.

"The collaboration with SCA has been rewarding and educational throughout both the development and construction phase of the wind farms. In a joint effort, we have managed to establish the biggest wind power area in Scandinavia, with great support throughout the entire project from both local communities and companies. Statkraft will continue to manage the wind farms in the same spirit as before, but now as sole owner," says Johan Boström, Asset Owner, Wind Power Sweden, Statkraft.

The new agreement does not entail any changes in the relations to other land owners in our wind farm areas. Furthermore, no changes are made in terms of the company's staff or hired contractors.