Seven of Statkraft's power plant reservoir dams will be rehabilitated in the mountain area between Høyanger and Balestrand. Traces of the work will then be repaired, and nature will be brought back to the way it was in the best possible way.

All hydropower plants impact the surrounding landscape with roads, dams, penstocks and power lines. In Høyanger, the mountain landscape will be restored to remove the traces of both old power plants and new modernisation work. In a few years, there will be little left of the loose material that was blasted out to make a new tunnel.

Norsk Hydro is the cornerstone company in Høyanger Municipality in Vestland County in Norway, but neither the town nor the company's aluminium plant would have existed without hydropower.

For more than 100 years the power plants have drawn water from a number of reservoirs in the mountains between Høyanger and Balestrand. Statkraft has modernised its power plants over the past decade and operates three of them in Høyanger: K5, Eiriksdal and Makkoren.

Until the end of 2023, many of the power plants' dams will be reinforced and improved to meet current safety requirements. But how can you do that when there are no roads up the mountain?

Had to build a road and tunnel

A cable car system beside the penstock has long been the only way up the mountainside. But transporting large modern construction machines and trucks in parts in an old cable car was not possible for the larger dam projects.

"The solution was to build a four-kilometre-long tunnel through the mountain, from the valley up to the dam facilities. We also had to upgrade and expand the old access road to withstand modern construction machinery," says Trine Hess Elgersma, concession and environment adviser in Statkraft's Production business area.

By the autumn of 2020 the tunnel was practically complete and being used by large trucks shuttling gravel up the mountain. 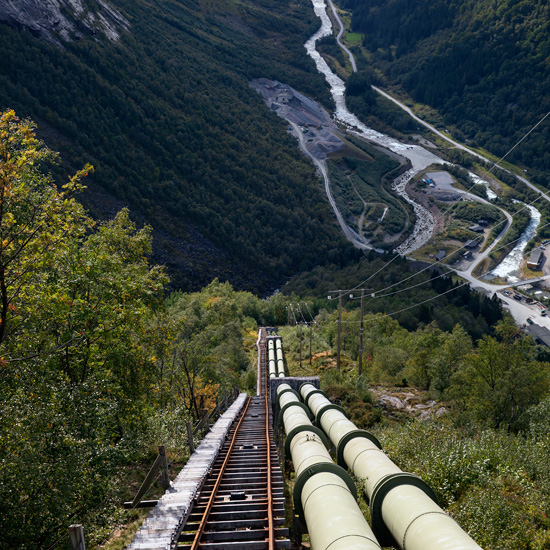 The old cable car track along the penstock down to the power plant at the bottom of the valley has long served as an access option up the mountain, and it was used to transport both people and material up to the area where the reservoirs and dams are located. Even a bulldozer was once transported up, but then in parts that had to be reassembled on the top.

For the ongoing rehabilitation of the dams, it was decided to build a separate tunnel, so that trucks could safely transport materials and gravel up the mountain.

Building a long tunnel through the mountain and then expanding and reinforcing 10 kilometres of road naturally leaves its mark. An enormous amount of material was removed to build the tunnel, creating a huge pile of gravel down in the valley. Some of this is transported up the mountain to be used for the road and later for the dams. Recycling local rock fill saves time, money and the environment.

"In a project like this, it's important of course to plan well to minimise the damage to nature. At the same time, we carry out ecological restoration measures to repair some of the inevitable impacts on the natural environment," says Hess Elgersma.

"And while we’re at it, we can also make amends for ‘past sins’. Far less attention was paid to environmental consequences a hundred years ago. Awareness of nature conservation grew in the 1970s, and today it's part of the developer's obligations to minimise impacts on nature as far as possible, and to take remedial measures. Today we also have the knowledge to implement remedial measures in a much better way."

During a visit in the middle of September 2020, we took a ride up in the cable car to around 600 metres above sea level, then drove by car into the mountains on the old and bumpy construction road. The first section of the road, from the end of the cable car track to Lake Roesvatnet, runs below the tunnel and will not be upgraded. The upgrade work starts from where the tunnel ends at Lake Roesvatnet and further along the lakes, inland through the Erings and Lange Valleys.

Seven dams will be modernised in the mountain area between Høyanger and Balestrand. Two of the dams in the Nord Valley cannot be reached by road, so construction machinery and crew will be transported there by barge and materials will be flown in by helicopter.

Modernisation work on the dams will not begin until 2021, so the construction road must be completed by then. However, the restoration work following the tunnel and road construction has already begun. All vegetation in the area around the tunnel opening has been removed, but once the surrounding slopes are filled in and covered with material, the tunnel opening will barely be visible from the other side of the lake. When the construction work is completed, the area will be restored to its original appearance with soil and vegetation and all traces of the work will be gone.

"When we replant vegetation in areas like this, it's important to make it look as natural as possible. We have to remove blasted rock, and we cannot level out or pack down the material as we might on a normal site. Here the material must be spread loosely, and peat and seed banks in the topsoil will help the area grow back naturally," says Hess Elgersma.

Statkraft has hired a landscape architect to advice on how the landscape should be formed to blend in as much as possible with the surroundings.

At Lake Roesvatnet there is also an old decommissioned power station and a penstock that used to carry water from Lake Høgsvatnet.

"This and several other obsolete power plants and penstocks and buildings will be demolished and removed before the natural environment is restored. Of course, we remove all gravel, concrete, metal, asphalt and blasted rock before we begin the restoration work."

As we drive into the mountains this early autumn day, we constantly have to yield to the trucks. Fortunately, there are lay-bys and turnarounds at 200–300 metre intervals. Some of them are temporary and will be removed once the construction work is completed.

"The top layer of peat and topsoil is stripped off and placed in piles for use in revegetation," says Trine Hess Elgersma. We stop when we come to what to an untrained eye looks like a large mound of earth with twigs, roots and tufts of grass sticking out here and there.

"This is soil that has been removed in the area, and it acts as a top layer and natural seed bank. When we put this back, it will support the growth of vegetation that is natural to this area. We set strict requirements for the contractor and other project participants to prevent alien plant species from spreading in connection with the construction work."

At Lake Høgsvatnet the new intake to the Eiriksdal power plant is discreetly located with a concrete wall at the end of the lake. A control station for the intake is built into a slope. From here, the water goes underground through a tunnel and pipe to the power plant down in the valley. There are few traces left from the construction work, but the grass embankment right next to the intake is one of them.

"Waste material from the construction of the power plant in 2014 was placed here. Afterwards, the area was restored with stone and peat to fit in with the surroundings. Now you see that the vegetation is returning, first in the form of grass, then with heather and willow bushes. In a few years you will not be able to see any trace of this waste site," says Hess Elgersma.

Along the construction road into the Lange Valley, there are several cuts and slopes that currently look like open wounds in the landscape, but that will be covered with material and will grow again. At Lake Stølsvatnet, the road runs through a moraine ridge. It was necessary to secure against landslides here, and a retaining wall was built in natural stone below the road.

"Guard stones will be placed along this section of road. This is an old-fashioned way of securing roads, but it fits in well here where, among other things, there are a number of old summer mountain farms," says Hess Elgersma.

Construction work like this goes on for many years, and traces of it will be visible for even longer. Work on the tunnel began in 2017, and work on the dams will be completed by the end of 2023. Then clean-up and restoration work will start in 2024.

"It is clear that the landscape will be impacted, both during the construction period and afterwards, but this was not exactly a pristine mountain area earlier. There have been dams, power stations, penstocks and power lines here for almost a hundred years," notes Hess Elgersma.

"Modernisation of existing power plants also makes its mark in the landscape, but we believe that through sound and professional implementation of environmental and landscape plans, we will ensure that the traces we leave behind are as small as possible."

"Awareness of nature conservation grew in the 1970s, and today it's part of the developer's obligations to minimise impacts on nature as far as possible, and to take remedial measures. Today we also have the finances and knowledge to implement remedial measures in a much better way."