A culture of entrepreneurship and the ability to seize ever new opportunities means that he cannot imagine a better company to work for – whether the workplace is in Norway, Germany or Brazil.

At the age of 24 in 2009, he went to work for Statkraft in Germany, first as an analyst and then as a power trader. He bought and sold electricity all over Europe, a bit like on a stock exchange.

At 28, he was promoted to his first management position, with responsibility for all the trading in wind and hydroelectric power in the UK. At the time, he was based in Germany, but took frequent trips to London.

At the age of 35, Arne Jørund Haugland became marketing director for Statkraft in Brazil. After almost two years in Rio de Janeiro, he returned home to Norway in the late autumn of 2021 to lead a team that is responsible for the early stages in the development of new business opportunities.

“The first six months as leader of a newly created team in Germany, with members from different countries, was an incredibly steep learning curve. I think I became hardened for life,” Haugland says with a laugh.

After six years, when he was ready to try something new, Statkraft asked, “what do you want to do?”

Haugland proposed establishing a unit for digitalisation and algorithm trading, so that robots and artificial intelligence could help trade electrical power in Europe. No one in Statkraft had tried this before and Haugland was given the green light.

After two years, he was ready to move on to new opportunities, fresh challenges, and to learn more. And most of all, he wanted to move to Brazil, so he did.

We meet Arne in Brazil, where he lives in an apartment at Ipanema Beach in Rio de Janeiro, with a fantastic view of the sun-glittering sea. Every day before work, he slips into his swim shorts and flip-flops, leaves his apartment and walks straight onto the beach. There he runs barefoot for half an hour along the shoreline, with a flip-flop in each hand (if he puts them down anywhere, they are bound to be stolen), before finishing off with a dip in the sea.

Arne’s job in Brazil is twofold. One of his teams works to establish customer relations, preferably with major industrial companies that require a substantial supply of electricity, so there will be a customer base when Statkraft establishes renewable energy projects in Brazil.

The second team engages in power trading, with the aim of profitably buying and selling energy.

“Much of what we've learned about trading in Europe can be applied in Brazil. The Brazilian market is undergoing a transformation, and will eventually become more like the European market,” Haugland said.

Ever since Arne Jørund Haugland was a youngster, he wanted to travel. His first trip abroad was at the age of 17, when he left his hometown of Mandal on the southern coast of Norway for life as an exchange student in Germany. Later, he studied at the Norwegian School of Economics and Business Administration (NHH) in Bergen. He has also travelled to various places across the globe.

“At Statkraft there are always new opportunities. I’ve had many different positions here at Statkraft. The company has an entrepreneurial culture and gives people the chance to try new things,” says Haugland.

He explains that he is driven by change and constant development. On personality tests, he scores highly for innovation and creative thinking.

“I can imagine that people with my kind of personality are not necessarily attracted by large firms. I easily become restless and want to move on. Therefore it’s fantastic that Statkraft is so innovative and open to new ideas. This applies not only to me, but many co-workers at Statkraft experience the same,” Haugland says.

He also likes the fact that Statkraft is a state-owned company.

“We have a commercial focus, but the money we generate either goes into the national budget and then back to Norway, or into new, renewable investments. It feels meaningful and gives me an extra motivation for the work I do.”

“Finding out how best to reach out to other people is incredibly exciting.”

Change in the DNA

Haugland is used to cultural differences, watching people communicate, knowing what both sides are trying to get across and seeing them misunderstand each other. He knows that you have to talk to people differently in Germany, the UK and Brazil, and he adapts accordingly.

“Finding out how best to reach out to other people is incredibly exciting,” he says.

Haugland’s objective as a leader is to make his team independent enough to continue without him, so he can focus on further development and strategy.

“Therefore I have to create a culture where there’s room to fail, where there’s a balance between control and risk. I like to challenge my staff to be proactive, to dare to take responsibility and ownership.

“That’s easy in Norway, where we’re used to being trusted to take responsibility. But in many other countries, people are used to doing what their manager tells them and are afraid of making a mistake because mistakes often bring personal consequences. That’s why I’m keen to show humility and speak up myself if there’s something I don’t understand or do wrong. It’s also important for me to familiarise myself with the different professional disciplines. For example, I trade myself sometimes, so I can ask the right questions and support my staff when needed,” he says enthusiastically.

“I want a culture where change is in our DNA. That’s vital because everything around us is changing all the time,” Haugland said.

During the coronavirus pandemic, his team had to be quick on their feet and able to find solutions in a difficult situation.

“And it’s worked really well. We have performed even better, and become more efficient.” 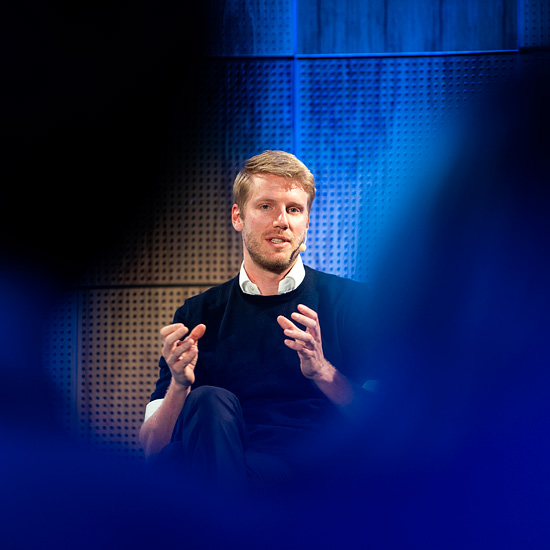 In March 2019, Arne Jørund Haugland, then director of Digitalization, Quantitative & Algorithmic Trading at Statkraft, was one of the speakers at the Technoport conference in Trondheim, where more than 1,000 innovators met to explore an exciting world of technological innovations.

“I wouldn’t have managed to do this job without meditation and training. Meditation has helped me understand myself better.”

“Being responsible for carving out a new market is highly demanding. Every day, you meet challenges to your professional expertise and leadership, as well as cultural issues.

“I wouldn’t have managed to do this job without meditation and training. Meditation has helped me understand myself better, and gives me the chance to start each day with a clean slate, ready for the tasks ahead. It makes me calmer, more focused and better able to cope with stress. In my job, that’s essential,” says Haugland, who has acquired a solid dose of experience in coping with stress.

“I no longer identify myself with results, because I can’t control those. The only thing I can do anything about is my own performance,” he says.

He is also keen to decompress in other ways as well, like reading novels, philosophy, psychology and learning Portuguese. Or surfing, climbing or playing volleyball on the beach in Rio.

“I also love to travel. I want to experience the country and the regions, get to know the local people. Brazilians are so upbeat. It was my birthday not long ago, and everyone in the office in Brazil gathered around the screen and sang Happy Birthday to the sound of Brazilian drums,” Haugland says with a smile.