Brazil is blessed with a wealth of natural resources and one of the world's cleanest power supplies. Large-scale investment in solar and wind power will provide even more renewable power in the years ahead.

Fernando de Lapuerta is Statkraft's country manager for Brazil. The company's Brazilian head office is located in Florianópolis in the state of Santa Catarina.

Brazil is the world's fifth-largest country by area and the sixth-most populous. It is also the world's second-largest producer of hydropower, after China. Large hydropower plants account for more than 60 per cent of domestic electricity production in the South American country. But even though electricity consumption per inhabitant has increased in recent years, it is still 10 per cent below the global average.

"Like Norway, power production in Brazil has historically been dominated by hydropower," says Fernando de Lapuerta, who is Statkraft's country manager in Brazil.

The largest untapped potential for hydropower lies in the Amazon basin in the north, far away from the most densely populated areas along the east coast. At the same time, the Amazon rainforest is of inestimable importance for the global climate and biodiversity.

"So for environmental reasons, there are few plans to expand the production of hydropower from today's installed capacity of 123 GW. The major growth in production capacity is expected to come from solar and wind," says de Lapuerta.

Brazil has significant oil and gas reserves, but these resources are mostly exported and not used to produce electricity, since the high proportion of hydropower helps keep electricity prices low.

Brazil has two operational nuclear power plants, Angra 1 and Angra 2. The plants are located between the country's two largest cities, San Paulo and Rio de Janeiro, on the east coast and account for about three per cent of Brazil's total power production.

Construction of a third nuclear power plant, Angra 3, began in the 1980s, but has been halted several times. In 2021, President Jair Bolsonaro declared that construction would resume. The plant is to be completed in 2026.

The proportion of renewable power sources in Brazil's electricity mix has been strongly increasing in recent years and was 84.8 per cent in 2020. In comparison, the global national average in the same year was 23 per cent.

"The production of wind and solar power is expected to increase by around 35 per cent by 2025, compared to 2021. Brazil is a large country, and access to natural resources varies between regions. In some places there is a lot of water, while other areas have an exceptional amount of wind and sun," says de Lapuerta.

He believes that Statkraft is well positioned for solid growth in the company's production of renewable power in Brazil in the coming years.

Statkraft has been present in Brazil since 2008 and currently has more than 250 employees in the country.

"We started with market operations in the form of power purchase agreements (PPA) and in 2012 moved into power production after acquiring several operating power plants. Since 2018, we have focused on developing our own power plants and expanding our portfolio within solar and wind," says de Lapuerta.

Today Statkraft operates 18 wind and hydropower plants in Brazil with a total installed capacity of 450 MW. The company is the first power producer to offer guarantees of origin in the country.

The development of the Morro do Cruzeiro (80 MW) and Ventos de Santa Eugenia (520 MW) wind projects in northeast Brazil will more than double Statkraft's installed capacity to 1050 MW. The power plants are to be completed in 2023 and 2024 respectively.

"Wind power makes up 95 MW and hydropower 355 MW of our current installed production capacity. With the new projects, the share of wind power will increase significantly," he says. Most of the power to be produced in the new wind power plants has already been sold through long-term contracts.

Hydropower is the most flexible renewable energy resource and will continue to be the main source of Brazil's electricity production for many years to come.

"With our hydropower and extensive development of solar and wind power plants, we are well equipped for the significant increase that is expected in the demand for electricity in Brazil," says de Lapuerta.

Towards 2025, Statkraft will expand its Brazilian operations mainly within wind and solar power. The growth will take place through mergers and acquisitions, in addition to developing its own projects from the ground up, known as greenfield projects. 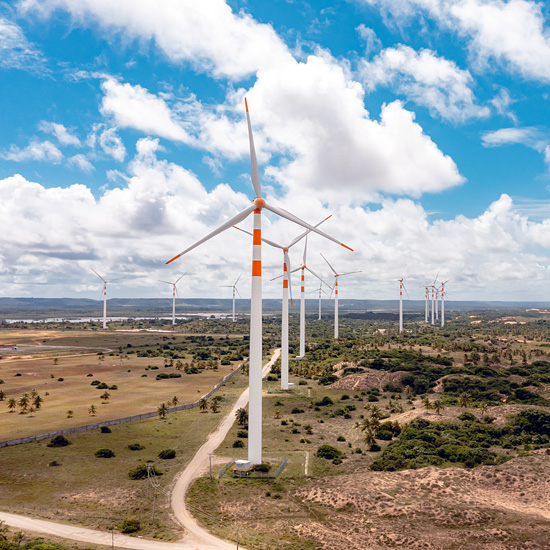 A process has been set in motion to liberalise the energy market, and new legislative proposals intend to provide a more well-functioning power market for both producers and consumers.

"The development of a more flexible energy market is a step in the right direction, and the changes signal an understanding of market dynamics. This will help create new business opportunities, which I believe will be positive for Statkraft," says Fernando de Lapuerta.

However, Brazil was among the countries in the world hardest hit by the coronavirus pandemic, with more than 30 million infected and over 660 000 deaths. According to the World Bank, President Bolsonaro's strategy of keeping society open to quickly achieve herd immunity is likely to send the country into an economic recession.

During the pandemic, Statkraft's employees largely worked from home offices.

"Fortunately, we were able to keep the businesses going more or less as before. The pandemic has affected some of our projects in the construction phase because costs have increased, but we have largely managed to stay on target," he says.

Statkraft's country manager in Brazil is based at the head office in Florianópolis in the state of Santa Catarina in the south of the country. The company also has an office in Rio de Janeiro, where market services are offered for commercial and industrial customers from various segments.