Lake Styggevatn beside the Jostedalsbreen glacier in Luster Municipality in Vestland County is regulated with a dam 55 metres high. The reservoir has a capacity of about 350 million cubic metres of water and is the main reservoir for Jostedal power plant.

Tired of gloomy news about global warming, melting ice caps and extreme weather? There is also climate news that provides hope for the future.

Here are five positive developments on the climate front

1. 95 per cent of all new electricity production will be renewable

In 2021, the world took a big step closer towards a greener future: a new record was set in renewable electricity capacity. At the same time, large emission cuts are taking place across many sectors.

The head of the International Energy Agency (IEA), Fatih Birol, has commented that the renewable record is a sign that a new, global energy economy is being born. By 2026, it is expected that 95 per cent of all new electricity production will be based on renewable energy sources. This is mostly due to the large-scale, global development of solar and wind power.

The IEA does point out, however, that in order to achieve net zero greenhouse gas emissions by 2050, solar and wind power development planned over the next five years needs to approximately double.

Increased expansion of renewable capacity will be positive for faster electrification of various sectors. Much has already been done to reduce emissions in the construction, transport and industrial sectors:

The building sector accounts for about 10 per cent of global energy-related CO2 emissions, mainly from space heating and cooking. Fossil gas has a long history as a heat source, but is expected to be outrivalled by new electric heating options.

The transport sector is well on its way to being electrified. Transport accounts for almost 25 per cent of today's energy-related CO2 emissions, mainly due to fossil fuels.

Major advances have been made in the passenger car market. Major manufacturers such as Ford, Volvo, Volkswagen and Mercedes-Benz have ambitious goals for future electric car sales. In January 2022, electric cars accounted for 83.7 per cent of all new cars sold in Norway, according to the Norwegian Electric Vehicle Association.

Statkraft's Low Emissions Scenario – an analysis of the energy world towards 2050 – assumes that transport emissions in 2050 will be reduced by 70 per cent from current levels, and that passenger car transport will be mostly emission-free.

The industrial sector’s emissions of CO2 account for 19 per cent of global, energy-related emissions. Large parts of the industrial sector are difficult to electrify, especially when it comes to thermal processes that require temperatures above 500 degrees. However, other alternatives are often used to cut emission figures, such as hydrogen, bioenergy and carbon capture.

Electrification of industry will take time, and much of the technology needed is still under development. Statkraft's Low Emissions Scenario indicates a gradual electrification towards 2050, so that 40 per cent of the industry's global energy demand will be covered by electricity by then.

Hydropower is an important and stable source of electricity. The picture is from Statkraft's run-of-river power plant on the Weser river in Lower Saxony in Germany.

Increasing production capacity for renewable energy will speed up electrification of various sectors of society.

The pandemic gave the planet a breathing space. Less air travel and fewer car trips reduced carbon emissions on a global scale. How long can it last?

The UN Environment Programme and the Global Carbon Project have calculated that the world’s total carbon emissions fell by seven per cent in 2020. The largest reductions came in the USA and Europe.

As societies reopen in 2022, CO2 emissions are on the way up again. Nonetheless there are several reasons to be hopeful for the future, according to Research Director Glen Peters of the Centre for International Climate Research (CICERO) in Norway and a member of The Global Carbon Project.

"If you look at transport and travel, we are not yet back to where we were before the pandemic. There are still repercussions of the Covid pandemic that will affect emissions for some time to come. In addition, there have been changes in society in terms of individuals' environmental awareness, new climate agreements and changes in climate policy. Renewable technology that is constantly improving is also helping to reduce greenhouse gas emissions," he says.

However, Peters believes it is not possible to see major changes in emissions in the near future. He estimates it will take 20–30 years before we see the effects of a new climate policy and of renewable technology becoming more competitive in the global market.

Nevertheless, Peters believes that we should see the decline in CO2 emissions during the pandemic as an opportunity; some proof that it is actually possible to significantly reduce emissions.

The researcher director is waiting to see how our behaviour changes as a result of this. Will we, for example, be content with less mobility and travel as was the case during the pandemic years of 2020 and 2021?

The electric vehicle charging company Mer has a network of charging stations in Norway and plans to expand in several European countries.

Carbon emissions fell during the Covid pandemic, not least as a result of fewer airplane flights and less car driving. What will happen after the pandemic? Have we learned?

3. The big nations have given climate commitments

The great powers China and the United States have announced that they will become climate neutral. Are they serious or are they bluffing?

In the autumn of 2020, Chinese President Xi Jinping came with a surprise announcement to the UN General Assembly: China, the world's largest contributor to greenhouse gas emissions, will be carbon neutral by 2060. For the first time, China committed to a long-term climate goal beyond 2030.

Two years later, at the Glasgow climate summit, several of world leaders made major and comprehensive climate commitments. Among other things, more than 100 countries agreed to reduce methane gas emissions by 30 per cent and to end deforestation and land depletion by 2030.

But what do such commitments mean in the grand scheme of things?

“When more and more countries, especially major industrial countries, join in, the level of ambition on the climate front goes up. It becomes a kind of race,” says Helga Stenseth, Head of Corporate Strategy and Analysis at Statkraft.

“Compared with before, climate commitments may now become advantageous for countries. It may be a massive disadvantage if countries lag behind with their climate goals.”

Although history has shown that climate commitments can be difficult to fulfil, Stenseth is optimistic. China’s surprising commitment will have a positive, indirect impact on, for example, the EU.

“The positive thing here is that China, the USA and other countries are moving in the right direction.”

Stenseth’s optimism is reinforced by the fact that renewable energy is becoming more and more affordable.

“I’m also optimistic because renewable energy is so cheap. In many ways, renewable solution such as electric cars also represent better technology. They are significantly more pleasant to drive,” she says.

“My kids no longer think that car driving smells bad.”

Did you know that renewable energy is cheaper than fossil alternatives in two-thirds of the world?

In 2020, renewable companies made serious inroads on stock markets in Oslo and around the world. Are they here to stay?

In 2020, the Oslo Stock Exchange was the European stock exchange with the most listings of renewable companies. Only the Stockholm Stock Exchange in Sweden saw a similar surge.

From 2016 to 2020, the market capital of listed renewable companies increased significantly. And new, green companies have started up and been listed on stock exchanges.

The same trend can be seen in many parts of the world. Blackrock, the world’s largest investment management firm, has put climate at the heart of its investment strategy.

In 2020, aggregate investments in the "green shift" totalled USD 500 billion – a record figure and a nine-per-cent increase on 2019, according to a recent analysis by BloombergNEF. This figure was significantly exceeded in 2022 with USD 755 billion.

Renewable energy is the most popular investment and, not surprisingly, electrification of transport accounts for an ever-increasing share.

"Norway has a good starting point. We have companies that have worked in renewable technologies for a long time. Electrolysis to hydrogen, for example, has a long history in Norway," says Statkraft's strategy and analysis director Helga Stenseth.

"In addition, sustainability is now at the top of the agenda of many companies. People are beginning to experience climate change in their everyday lives. There is generally much more discussion about climate than before."

She mentions Denmark as an example of a country that started early with renewable companies.

“So it’s high time that a lot is happening in Norway too!”

"Norway has a good starting point. We have companies that have worked in renewable technologies for a long time."

For decades, fossil fuels have dominated as the cheapest source of energy. But the old excuse that renewable energy costs too much is no longer valid; both wind power and solar energy now beat fossil fuels on price.

Over the course of a decade – from 2010 to 2020 – the cost of producing electricity directly from solar panels has sunk by a whopping 82 per cent, according to the International Renewable Energy Agency (IRENA).

In markets with plenty of sunny days, solar energy is now clearly the cheapest alternative.

In the same way as in countries with lots of sun, Norway has abundant wind resources. And thanks to technological advances and more efficient wind turbines, Norwegian wind power is also relatively inexpensive.

According to IRENA, the cost of onshore and offshore wind power has dropped by 39 and 29 per cent respectively since 2010. 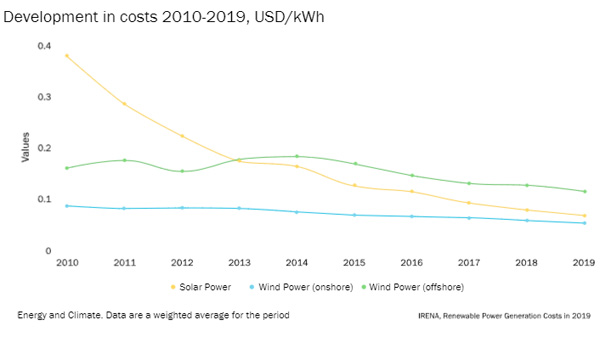 Why this has happened?

“The key is to increase volumes. With larger volumes, you get steady improvement and industrialisation. Volume causes costs to fall substantially. The technology gets a little better each time.”

Nevertheless, in most economies it is still cheaper to produce electricity using existing generating capacity than to build entirely new facilities. But according to Stenseth, this situation will change in a few years.

“Once you decide to build new generating capacity, basing it on renewable energy is undoubtedly the cheapest option. And the best!”

The Tysso II power plant is located by Ringedalsvannet in Tyssedal in Ullensvang Municipality in Vestland County.

Investing only in renewable energy

Statkraft has over 100 years of experience in renewable energy. The company develops and operates power plants in Norway and abroad and buys and sells renewable power. 100 percent of the company's investments in further growth will go to renewable energy.

Do you want to know more about Statkraft's business?