Germany has passed Norway in terms of new registration of electric cars. Here is a Tesla on the German Autobahn on the way to Frankfurt.

Germany aims to roll out at least six million electric vehicles on German roads by 2030 and provide access to one million charging stations. This also requires the power industry to join the team. 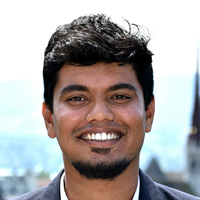 Karthik Gangadhara is business developer in Statkraft's eMobility unit in Dusseldorf, Germany. The unit is part of the company's business area Europe.

Germany is Europe's largest car market, home to well-known car manufacturers such as Daimler, Volkswagen and BMW, and has about 46 million passenger cars on its roads. The country wants to take a leading role in the production and use of electric vehicles (EVs).

In 2019, for the first time, Germany passed Norway as Europe's largest market in terms of new registrations of EVs.

Chancellor Angela Merkel declared in November 2019 that subsidies for the purchase of EVs will increase. The cost will be shared between the state and the automotive industry, and the programme will last until 2025.

"These subsidies are important, but are far from the only measure that will stimulate consumer behaviour towards e-mobility," says Karthik Gangadhara, business developer in the eMobility unit at Statkraft's office in Dusseldorf.

"Today there are around 34,000 publicly available EV charging stations in Germany. The plan is to increase this number to over 50,000 in the next two to three years and to one million by 2030, backed by a state investment of EUR 3.5 billion," he says.

In addition, an EU directive requires all new and renovated residential buildings with more than ten parking spaces to include the pre-wiring necessary for charging points to be installed in each space.

"For commercial buildings, 20 per cent of the parking spaces must be pre-wired. There are also tax benefits for companies installing charging stations at the workplace," he says.

Registrations of new electric cars in Germany increased by 60 per cent in 2019 compared with 2018. A number of new EV models were unveiled at the International Motor Show in Frankfurt in 2019.

"There are now 57 German EV models, most of them from the Volkswagen Group (Volkswagen, Seat, Audi, Skoda and others). In 2022 consumers will be able to choose from over 100 battery-powered EV models, and from 172 models by 2025. That's quite impressive," says Gangadhara.

To strengthen the technological development of EVs, German automakers have announced investments of over USD 45 billion over the next three years. Tesla's planned gigafactory in Berlin will further accelerate the electric car revolution.

"A significant increase in EV sales is expected in Germany in the coming years. This requires the charging infrastructure for EVs to be expanded at the same rate, which is closely linked to the power industry," he says.

The development of charging infrastructure and its connection to the power industry was also an important topic at the International Motor Show.

"A major shift is underway in Germany. Pressure from government agencies, changes in consumer behaviour and subsidies are together giving the industry a huge push towards electrification," says Gangadhara.

Interaction with the power industry

One of the biggest challenges that must be overcome to accelerate the EV revolution is the costs associated with electric vehicles, both the purchase price and the total cost of ownership in the form of charging, maintenance, etc.

"First, manufacturers must accelerate their strategic renewal of the vehicle fleet and deliver in line with the growing demand. We already see the beginning of this, with major investments along the entire EV value chain."

"Second, ease of use, especially regarding charging, is a concern. Different charging point operators, networks and power aggregators have different pricing models, which makes it harder for the customer to adapt," says Gangadhara.

"Third, the calibration law in Germany, called 'Eichrecht', is a challenge for manufacturers of charging hardware . A considerable number of first-generation chargers must be retrofitted or reinstalled to comply with the law," he adds.

The connection between e-mobility and electricity consumption calls for an increase in both supply from the power industry and load on the power grid.

"This could be handled by new business models, such as smart, balanced charging and dynamic pricing. All of this requires collaboration across industries," he says.

With the acquisition of the companies E-WALD and eeMobility, Statkraft is joining the German EV adventure.

"Statkraft aims to be the leading player in EV charging in Europe. Through its ownership in the Norwegian company Mer (formerly Grønn Kontakt), Statkraft has extensive experience from Norway and wants to leverage this know-how in Germany," says Gangadhara.

In 2018 Statkraft acquired 61 per cent of the Munich-based company eeMobility. The company offers charging solutions for corporate car fleets. In 2019 Statkraft acquired the company E-WALD, also based in Bavaria. E-WALD operates around 300 public charging stations throughout Germany and also offers an EV sharing service. To support its EV focus, Statkraft is also in the process of electrifying its own car fleet.

"We have both the market position and the expertise from the power industry, so this is a perfect match," says Karthik Gangadhara.

Germany's Chancellor Angela Merkel declared in 2019 that German subsidies for purchases of battery electric vehicles (BEVs) with a list price below EUR 40 000 will increase by 50 per cent from EUR 4 000 to EUR 6 000.

There are three main types of electric vehicles (EVs), differentiated by how electricity is used as an energy source.