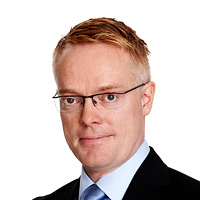 Hallvard Granheim, Executive Vice President of Statkraft's business area Markets, wants to make it clear: "Statkraft is making money on high power prices. Most of our power production is sold at spot price and ensures that the company and its owners, the Norwegian state, profit from high prices."

In addition, the company enters into long-term financial contracts on electric power at a given price. Every quarter, the difference between the pre-agreed fixed price and the current spot price is recorded as a financial liability and recognised as a profit or loss in the company's accounts. With high spot prices, this could appear as if the company is losing money, and vice versa. It has to do with long-term hedging.

"Hedging is not gambling, as I've seen some claiming it to be. On the contrary. Hedging is a key element in the company's strategy. It's critical to our ability to enter into long-term power contracts with industrial companies, ensure that our public owners get predictable dividends, and secure revenues from our business activities. It would be irresponsible not to enter into such contracts," says Granheim.

In a weather-dependent power system like Norway’s, for example, electricity prices will normally vary widely. And in 2022, the war in Ukraine and the power scarcity in Europe have contributed to a historic and dramatic price hike in all energy sources.

To ensure a certain level of stability in cash flow and reduce risk, Statkraft sells a small share of its power production in advance, primarily by entering into long-term contracts with Norwegian industrial companies. These contracts also reduce risk for buyers of power in energy-intensive industries.

"Just as a fixed interest rate contract can mean lower interest expenses on a home loan in periods when floating interest rates shoot up, the pre-agreed power contracts work in such a way that electricity prices appear far too low when prices otherwise shoot up – as we have seen in 2022. Over time, however, the long-term contracts provide power producers and buyers alike with predictable conditions and lower risk," says Granheim.

Statkraft also sells a small amount of power in the financial power market several years in advance. It is these contracts that have inflicted significant unrealised accounting losses on the company in 2022. If this loss is viewed in isolation, however, it gives a misleading picture of the overall consequences for the company.

When a power producer sells power in advance, the company assumes a financial obligation. The company is required to report this obligation in their accounts every quarter. If the price of power has risen since the time when the pre-agreed contract was entered into, it will appear as a loss in the accounts, since the company is obliged to deliver power at a price lower than the market price, and thereby misses out on a larger profit than that secured through the advance sale.

When the value of each hedged pre-agreed contract is assessed every quarter, the full term of the contract is taken into account. This can be a matter of many years and, consequently, large amounts.

About the Markets business area

Opens in new tab or window

"To obtain a full picture of how the high electricity prices have affected Statkraft, it needs to be kept in mind that revenues from the ongoing production will increase. The high spot prices are reflected continuously in the accounts for unsecured production, but the future spot revenues are not recorded in the accounts," Granheim points out.

This is in compliance with the accounting rules with which Statkraft and large Norwegian companies comply, but it can easily give a skewed impression of the company's situation.

What is presented in the accounts as a loss is in practice an advance sale of power at a fixed price. In 2022 this fixed price has been lower than what could have achieved by selling the power at a later point in time, but it is nonetheless above Statkraft's production costs. So, the company also earns money on this part of the production.

When electricity prices drop below the contract price, advance sales of power will yield higher revenues because the price achieved is higher than if one had waited until the time of production.

Advance sales of power make power producers' revenues more predictable and thereby make planning easier. In 2022, Statkraft has earned lower revenues than it would have done if the company had not sold a share of its power in advance. But it is worth noting that such an advance sale made two years previously contributed to higher revenues at a time when electricity prices were extremely low.

The governments of Sweden, Finland and Denmark have provided enormous guarantees to ensure that critical power producers do not fail. Can they fail? Why hasn't the Norwegian state done likewise?

All companies on the Nasdaq power exchange must provide collateral according to the size of the contracts they enter into. When power prices go sky high, so do collateral requirements.

This collateral, called "margin requirements", must be made available at short notice, and entails a substantial liquidity risk in the form of a risk of increased costs in the event that a counterparty fails to settle its obligation on time. So even though financially sound power producers earn good money on power sales, the large collateral requirements can still create problems if risk is not properly managed.

The authorities in Sweden, Finland and Denmark have announced the introduction of guarantee schemes to avert power producers going bankrupt as a result of such margin requirements. The Norwegian Government sees no need to do likewise for the time being, but is monitoring the situation closely.

Hallvard Granheim understands the need for special measures in such extreme market situations as we have seen in 2002, but adds: "Statkraft is in a robust situation. We have sound financial management that enables us to cover our obligations. We don't need support from government schemes to manage our transactions in the market."

"One key reason for the difference in needs between Norwegian and other Nordic power producers is that in Norway we have a long tradition in long-term, physical power contracts that are entered into directly with industry, and that do not trigger such margin requirements," he explains.

"Hedging is a key element in the company's strategy. It's critical to our ability to enter into long-term power contracts with industrial companies, ensure that our public owners get predictable dividends, and secure revenues from our business activities. It would be irresponsible not to enter into such contracts."
Hallvard Granheim
Executive Vice President Markets

Physical and financial power markets: what are they?