Laholm power plant in Halland County was built in 1932 and is 100 per cent owned by Statkraft. The plant has an annual production of 36 GWh.

Few countries in the world use more energy per capita than Sweden. Nevertheless, its greenhouse gas emissions are low, thanks to renewables generating a large part of the power consumed. The homeland of climate activist Greta Thunberg aims to be CO2 neutral by 2045. 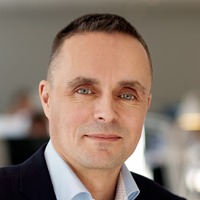 Jakob Norström is Statkraft's country manager in Sweden. He is CEO of Statkraft Sverige AB and regional director for Sweden in Statkraft's business area Nordics.

Sweden's climate law came into force in 2018. Every four years, the government must present a climate policy action plan describing how the country can achieve the climate goals adopted by the Riksdag (the Swedish parliament).

Already in 2012 the government met its target of 49 per cent renewable share in power consumption by 2020. For the energy sector, the target is to have 100-per-cent renewable power generation by 2040.

The independent Climate Change Performance Index (CCPI) ranks the world's countries based on a variety of climate criteria. In 2020 Sweden tops the list again, for the third year in a row.

"Sweden's climate ambitions, including 100-per-cent renewable energy production, go hand in hand with our strategy in Statkraft. There should be great opportunities for more business activities aimed at, for example, electrification of transport through various solutions," says Jakob Norström, CEO of Statkraft Sverige AB and Sweden regional director for Statkraft's Production business area.

"People in Sweden are generally positive towards the transition to electric transport, although the northern part of the country may experience difficulties at first with long distances and the range of electric vehicles. The commitment is there, so the obstacles will be resolved further down the road," he says.

In 2019, Swedish climate activist Greta Thunberg was named 'Woman of the Year' by the Expressen newspaper, 'Person of the Year' by Time Magazine in the US, and was nominated for the Nobel Peace Prize.

Thunberg's Fridays for Future movement has criticised the Swedish government's climate action plan for not being concrete enough.

"Greta Thunberg has in some ways paved the way for public opinion and has become a symbolic figure for Sweden," says Jakob Norström.

About 80 per cent of electricity production in Sweden today comes from nuclear power and hydropower. Nuclear power is considered a fossil-free but non-renewable energy source. Nuclear power has been hotly debated in Sweden, but the energy authorities believe it entirely possible to reach the zero emission target in 2045 using only renewable energy sources. To reach that goal, they estimate that about 100 TWh of new power generation must be developed.

Hydropower and bioenergy are Sweden's largest renewable sources. Hydropower is mostly used for power generation and bioenergy for heating. Forest covers 63 per cent of the country and is the main source of bioenergy.

Wind power production is increasing year on year in Sweden – between 2000 and 2020 it increased from 0.5 TWh to 27.6 TWh. Wave power and solar power are also on the rise in the country.

"Hydropower in Sweden has been around for over 100 years and has played a key role in the industrialisation of the country. Hydropower will be an important factor in future climate change adaptations as a regulating power for renewable energy. However, all hydropower production is facing a challenging licence review over the next 20 years. It will be important for the authorities and producers to agree on how the process and the evaluation of environmental and social conditions will be carried out," says Norström.

In 1991 Sweden was one of the first countries in the world to introduce a carbon tax. Sweden has the highest carbon tax in the world, yet the county's gross domestic product has grown by 78 per cent in the same period. Sweden is therefore often cited as an example of how it is possible to reduce greenhouse gas emissions and enjoy economic growth at the same time.

Sweden has also focused on municipal climate measures, with state support for projects such as developing district heating networks and installing heat pumps. All of Sweden's 290 municipalities have their own energy adviser who citizens can contact.

Stamåsen wind farm, located south of Strömsund in the municipalities of Strömsund and Sollefteå in the counties of Jämtland and Västernorrland, was inaugurated in September 2013 and consists of 26 wind turbines. The wind farm is 100 per cent owned by Statkraft.

Statkraft Sverige AB and Statkraft Financial Energy are wholly-owned subsidiaries in the Statkraft Group. Statkraft has about 200 employees in Sweden.

Statkraft Sverige AB operates and maintains the 54 hydropower plants and is also involved in planning and managing the catchment area.

"We are working to develop and optimise our production to meet new market needs and to be an important part of the climate change adaptation. There will be significant opportunities for new businesses growth; electrification of the transport system and market services are the ones I envisage in the near future, but I also believe we can grow within district heating in Sweden," says Statkraft's country manager Jakob Norström.

Increased use of electric vehicles powered by battery and fuel cells has been identified by the European Commission as an important step in achieving an emission-free transport sector.

The Nordic Hydrogen Corridor (NHC) aims to establish emission-free transport solutions powered by hydrogen and fuel cells in Sweden. Statkraft has joined the NHC as a partner and has joined Everfuel, Hyundai, Toyota and Vätgas Sweden in the EU-funded hydrogen transport initiative in Sweden.

Another hydrogen project in which Statkraft is involved is the Inlandsbanan (Inland Line) railway line between Kristinehamn in the south and Gällivare in the north. In 2020 and 2021, Statkraft, LKAB and Inlandsbanan AB carried out a pilot project to investigate the possibilities for hydrogen-powered freight traffic by rail.

This can pave the way for emission-free transport of heavy goods through half of Sweden – without the need to set up overhead power lines. Freight cars on the Inland Line today are pulled by diesel-powered locomotives.