Warming up cities with resources that would otherwise be wasted is an important contribution towards a climate-neutral energy supply. 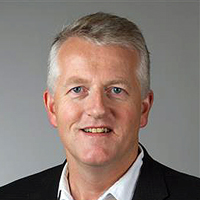 Svein Ove Slinde is managing director and head of Statkraft Varme, which is Statkraft's business unit for district heating activities.

"District heating is an important contribution to achieving local and national climate goals. But of course it depends on the energy sources we use to produce the heat," says Svein Ove Slinde, managing director of Statkraft Varme.

In 2017 fossil fuels provided five per cent of the energy mix in Norwegian district heating, while the remaining 95 per cent came from recycled heat, bioenergy and variable electricity.

"At the same time as district heating and district cooling are growing, the overall greenhouse gas emissions from the industry are steadily decreasing. Better energy utilisation and new technology have led to a significant reduction in emissions from district heating in recent years. Our bio-based plants now run almost exclusively on fossil-free energy sources," says Slinde.

Statistics from Swedish authorities show that CO2 emissions from district heating production in Sweden have fallen sharply since the 1990s. According to energiforetagen.se, this is an important contributor to Sweden meeting – and exceeding – its climate targets.

The circular economy has become an increasingly important concept on the road to a low-emissions society. In short, it is about utilising natural resources over and over, as opposed to a linear approach where they are extracted, used and discarded.

"The fundamental idea of district heating is to exploit resources that would otherwise have gone to waste," says Slinde.

The goal is to utilise heat that already exists, such as surplus heat from waste incineration or from other industrial activities, to heat buildings, towns and cities.

"Technological developments in recent years have also made it possible to utilise surplus heat with lower temperatures than before, for example from freezing plants and computer server parks."

The climate and energy debate focuses heavily on electrification, on shifting energy consumption from fossil fuels to electricity generated by renewable sources like solar, wind and water.

"Since such a large part of our energy needs is linked to heating, cooling and hot water, increased use of district heating could free up green electricity for other areas that still account for major climate emissions, such as the transport sector," says Slinde.

"District heating can also help free up capacity in the electric grid. An ever-increasing electricity demand will mean that in some cases, the current electric grid will lack the capacity to deliver the required power. It is very expensive to dig up streets and city squares to upgrade existing power cables. A better interaction between the thermal system and the power system, which is already found in most Norwegian and other Nordic cities, improves resource utilisation in several ways."

Since district heating is a flexible platform, electricity can also be used as an energy source when prices are low, such as when there is a surplus of wind and solar power.

Customer in the driver's seat

"We envisage a future where green land development will be characterised by the utilisation of existing surplus heat from business activities, the establishment of solar energy parks, and a need for infrastructure for electric vehicle charging, heating and cooling, to name a few. This means that we need to establish new cooperation and business models to meet customer needs," says Slinde.

According to the UN initiative, District Energy in Cities, heating, cooling and hot water account for 60 per cent of energy requirements in buildings worldwide. In addition to reducing energy demand, more climate-friendly alternatives must be implemented. 197 countries, including Norway, have joined the New Urban Agenda, which recognises district heating as a key factor for improving energy efficiency in cities.

"There is still a significant potential for climate gains from introducing district heating in many parts of the world. For example, local solutions based on oil and gas are very common in southern Europe. Since thermal distribution systems already exist in the buildings, the transition to district heating would not prove too difficult. We see that district heating plays an increasingly important role in energy utilisation in the Netherlands and Germany."

Surplus heat from waste incineration is a central source of energy for district heating.

"Recently in Trondheim we hosted an Indian delegation that was interested in hearing about how we have solved waste disposal challenges in Norway. The general rule is that the waste is sorted and then recycled as much as possible, but it is far more climate friendly and environmentally friendly to dispose of any remains in a controlled manner rather than deliver it to waste disposal sites. In addition to space and logistical problems, the world's waste disposal sites produce significant amounts of methane, a greenhouse gas," says Slinde.

In other words, district heating and cooling can solve several problems at once.