Floating solar power being tested in the reservoir at Statkraft's hydropower plant in Banja, Albania.

Calm reservoirs in sunny southern regions. Why not double the benefits and use the hydropower reservoirs to produce solar power too? For the first time, Statkraft is testing floating solar power at a hydropower plant in Albania. 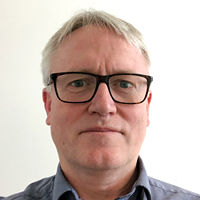 Floating solar power involves installing solar panels on floating structures on a body of water, such as a lake, fjord or ocean, or in a hydropower reservoir.

The floating solar park on the Banja reservoir in Albania will consist of four "rafts", each with a diameter of about 70 metres, covering a total of over 15,000 square metres with solar panels. Each raft has a plastic ring and a thin membrane, much like a giant inflatable children's pool.

It is this membrane and the large area that makes this concept unique. It was developed by the Norwegian company Ocean Sun. Although the membrane is only a few millimetres thick, it can easily withstand the weight of the solar panels and of personnel carrying out installation or maintenance tasks.

By the end of 2017, 250 MW of floating solar power was installed globally, and this is expected to grow to around 10 GW by 2030. This is a small amount compared to the total market for solar power, but every contribution is welcome in the renewable energy market.

Most of the existing floating solar plants are installed in Asia, where most of the growth is expected to continue, especially in countries such as India and South Korea.

"For Statkraft, this technology will be most relevant in countries where we're already established with hydropower reservoirs and where there is a lot of sunshine," says Hølland.

"Moreover, if the plant is placed in a hydropower reservoir, as we will test in Albania, it can make use of existing infrastructure. The plant will also reduce evaporation from the reservoir," says Tom Kristian Larsen, Statkraft's country manager in Albania.

This is the first time Statkraft is involved in floating solar energy, and while the goal is for the plant to be economically profitable, it is primarily an R&D project.

"We are interested in what we can learn. How will the rafts and moorings handle wind and varying water levels? What happens to the aquatic environment under the plant? How will it affect evaporation from the reservoir? How will the plant affect bird life? We want answers to these types of questions," says Tron Engebrethsen, senior vice president with responsibility for power plants in the International Power business area.

"There may be long-term effects or issues we are not presently aware of. So we will follow this project very carefully before we consider using the technology elsewhere," he says.

It is no secret that there is tough competition on price in the renewable energy market, and floating solar power is no exception. The key is to find solutions that can reduce costs.

"What makes this solution particularly interesting is that it requires little material per kilowatt of electricity produced. This can lead to lower costs per installed MW and is also good for the environment. Each unit basically consists of only a membrane, plastic floating rings and anchoring equipment, and the solar panels. Such a unit will have an installed capacity of 0.5 MWp (watt peak), and in principle you can just multiply with as many units as you need," says Hølland.

The membrane used in the reservoir of Statkraft's power plant in Banja, Albania is produced by a Norwegian company, but the other components are "off the shelf". This means that in the future, such a plant can easily be produced with local labour and materials.

"The floating ring consists of a 12-metre-long plastic pipe which is welded together on site. This time we sourced it from China, but in the future they can be bought locally. The use of local labour is also an important factor in the profitability of this project," says Larsen.

"We will use local labour for project management, installation and service. If we had produced this in Norway and had Norwegian installers put it together, it would never have been profitable. This model is also in line with Ocean Sun's vision. They want this to be a package solution where the membrane is shipped in a container while the rest is obtained locally," he says.

The first of the four large, round collections of solar panels was put into steady operation in Banja, Albania in April 2022 with a nominal power of 500 kWp. With all four solar power facilities on the Banja reservoir in operation, the solar power plant will all be able to deliver up to 2 MWp when the sun shines at its best.

This is the project

The company Ocean Sun has developed a new technology for a floating solar power plant.

The technology is developed with Norwegian expertise from solar energy and maritime industry, and with the support of Innovation Norway and the Research Council of Norway.

In collaboration with Statkraft, the technology will now be tested on the reservoir of Banja hydropower plant in Albania. The solar park will consist of four floating units of 0.5 MWp each and has a total investment cost for Statkraft of EUR 2.3 million.

This is the first major commercial contract for Ocean Sun, and Statkraft's first step into the floating solar power market. The goal of the project is to find out whether the technology is scalable and competitive in a rapidly growing market for floating solar power.